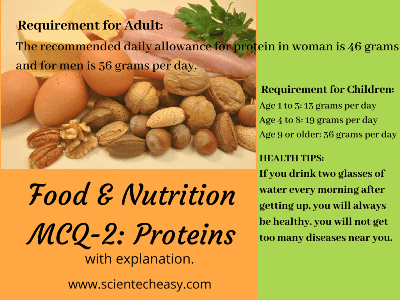 Explanation: Sulphur, phosphorus, iodine, and iron are also less present in the proteins.

4. How many types of amino acids are commonly found in proteins?
a. 25
b. 20
c. 15
d. 30
Ans: b
Explanation: Amino acids are the organic molecules that are made up of carbon, hydrogen, oxygen, nitrogen and sometimes sulfur.

6. Amino acids are joined by
a. Hydrogen bond
b. Peptide bond
c. Ionic bond
d. Glycosidic bond
Ans: b
Explanation: A covalent bond called peptide bond forms between the amino group of one amino acid and the carboxyl group of another amino acid.

11. Enzymes are
a. Proteins
b. Carbohydrates
c. Nucleic acids
d. DNA molecules
Ans: a
Explanation: The term Enzymes are coined by Kuhne.

15. Which of the following is caused due to extreme lack of proteins?
a. Malaria
b. Typhoid
c. Kwashiorkor
d. None of these
Ans: c

16. The protein present in the hair is
a. Elastin
b. Myosin
c. Keratin
d. Tropocollage
Ans: c

18. The proteins found in the milk of the cow is
a. Albumin
b. Vitelline
c. Livetin
d. Casein
Ans: d
Explanation: Casein is a protein which forms the part of the food for the young animal.

19. Which one of the following groups of chemical is not a food nutrient?
a. Carbohydrates
b. Vitamins
c. Proteins
d. Enzymes
Ans: d

23. The enzyme which forms the peptide bond is known as
a. Carbonic unhydrase
b. Peptidase
c. Carbohydrate
d. Peptidyl transferase
Ans: d

24. The proteins are synthesized at
a. Centrosomes
b. Ribosomes
c. Golgi bodies
d. Mitochondria
Ans: b
Explanation: Protein is synthesized on the ribosomes as a linear sequence of amino acids which are held together by the peptide bond.

25. Most abundant Protein is found in
a. Cytoplasm
b. Liver
c. Mitochondria
d. Brain
Ans: a

26. Which proteins are called messenger protein?
a. Enzymes
b. Hormones
c. Storage
d. Antibodies
Ans: b
Explanation: Hormonal proteins are the messenger proteins which help to transmit the signals to coordinate the biological processes between different cells, tissues, and organs.
Examples are insulin, oxytocin, and somatotropin.

28. Which of the following is a digestive enzyme that works in the stomach to break down the food?
a. Lactase
b. Pepsin
c. Keratin
d. Collagen
Ans: b

29. which enzymes break down sugar lactose found in milk?
a. Keratin
b. Collagen
c. Lactase
d. None of these
Ans: c

30. Which protein helps to protect from infection, bacteria, virus, illness, and diseases in the body?
a. Antibodies
b. Enzymes
c. Storage proteins
d. Transport proteins
Ans: a
Explanation: Antibodies are proteins which defend the body from antigens. They travel through the bloodstream.
Antibodies are utilized by the immune system to identify and defend bacteria, viruses and other foreign intruders.

32. Which protein stores the iron in the transport protein?
a. Ferritin
b. Keratins
c. Elastin
d. None of these
Ans: a
Explanation: Ferritin is a type of protein that combines with iron for storage in the liver.

34. Proteins are  synthesized in the body through a process called
a. Translation
b. Transcription
c. both
d. None of these
Ans: a

35. Translation occurs in the
a. Cytoplasm
b. Mitochondria
c. Ribosomes
d. nucleus
Ans: a

Some important points to remember about proteins:

1.  Protein is one of the basic building blocks of the Human body. protein is vital for the maintenance of body tissue, including development and repair.
2. Hair, skin, eyes, muscles, and organs are all made up of protein.
3. Proteins are made up of smaller units called amino acids.
4. When a number of amino acids are linked together by peptide bonds. a polypeptide chain is formed.
5. Proteins have large number function in human body. some examples of protein functions are Antibodies, Enzymes, Messenger, Transport, storage etc.
6. Source of proteins are milk, eggs, fish, meat, pulses, soybeans, and legumes.
7. Deficiency of protein causes Kwashiorkor and Marasmus.
8. The recommended daily allowance for protein in a woman is 46 grams per day and for men is 56 grams per day.
9. Protein requirement for children:
Age 1 to 3 years: 13 grams per day
Age 4 to 8 years: 19 grams per day
Age 9 or older: 36 grams per day.

Health tips:
If you drink two glasses of water every morning after getting up, you will always be healthy. you will not get too many diseases near you.

Final words:
I hope this article will help you to understand about Food & Nutrition MCQ-2 with the explanation based on Proteins. All questions are very important for practice. Many questions are asked in competitive exams like SSC, CDS, IES, NEET, NDA etc.