In Java programming, all non-primitive data types are simply called objects which are created by instantiating a class.

Key points:
1. The default value of any reference variable is null.
2. Whenever you will pass a non-primitive data type to a method, you are actually passing an address of that object where data is stored.

How to Declare Non-primitive type Data types in Java?

In primitive data type, we declare like this:
int p=100; // p is an int data type which can store the only integer value.

We create an object of a class using the new keyword. For example, the following statement creates an object of a class School and assigns it to the reference variable “sc”.
sc=new School();
where
School ➞ name of the class.
sc ➞ Object reference. An object reference is a variable which stores the addresses of the objects in the computer’s memory. An object represents an instance through which we can access member.

School() ➞ Constructor of the class. The constructor of a class which is generally used to initialize an object.
new ➞ is a special keyword that creates the memory in the java.

Let’s understand a simple practical example program. In this example program, we will get address of the object as output which is stored in object reference variable on the stack memory.
Program source code 1:

From above example program, you will have understood that In Java, a variable whose type is a class, does not actually hold an object. Actually, It holds the memory location of an object.

The object itself is stored elsewhere. In the below figure, you can see the memory location of object and object reference variable of above program. 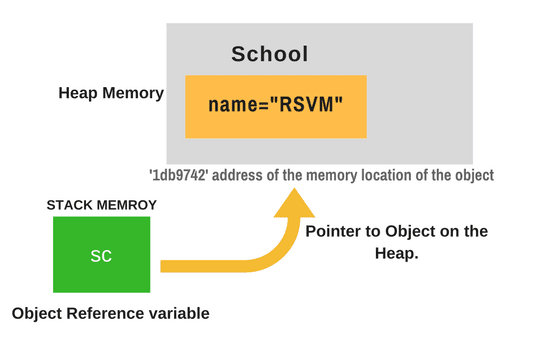 As shown in the above figure, Object reference variable ‘sc’ contains the address ‘1db9742’ which is the address of the memory location of the object on the heap. On this address, data is stored inside the heap memory.

Creating an object means storing data in memory. So, we can say that “sc” variable does not contain the object. It refers to the object.

There are five types of non-primitive data types in Java. They are as follows:
1. Class
2. Object
3. String
4. Array
5. Interface 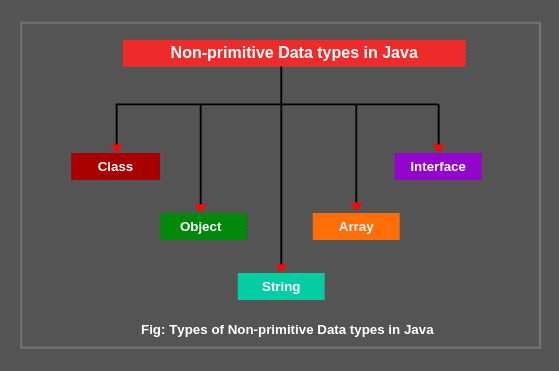 The example of declaring an array variable of non-primitive data type is
Student [ ] students; // Student is a name of class.
You will learn more details in further tutorials.

4. Interface: An interface is declared like a class but the only difference is that it contains only final variables and method declarations. It is fully abstract class.

Here, we have given just basic knowledge of non-primitive data types in java. You will get more knowledge in further tutorials.

Difference between Primitive and Non-primitive Data type in Java

3. All the data for the Primitive type variables are stored on the stack whereas, for reference types, the stack holds a pointer to the object on the heap.

Final words
Hope that this tutorial has covered almost all the important points related to non-primitive data type in Java with examples program. I hope that you will have understood this tutorial and enjoyed it.
Thanks for reading!