What is Block in Java?

A block in Java is a set of code enclosed within curly braces { } within any class, method or constructor. It begins with an opening brace ( { ) and ends with an closing braces ( } ).

Between the opening and closing braces, we can write codes which may be a group of one or more statements.
The syntax for a set of code written in a block of a method is as follows:
Syntax:
void m1( )
{ //  block start.
// statements.
} // block end.

Types of blocks in Java

There are three types of blocks in Java. They are as follows:
1. Local Block
2. Instance Block
3. Static Block 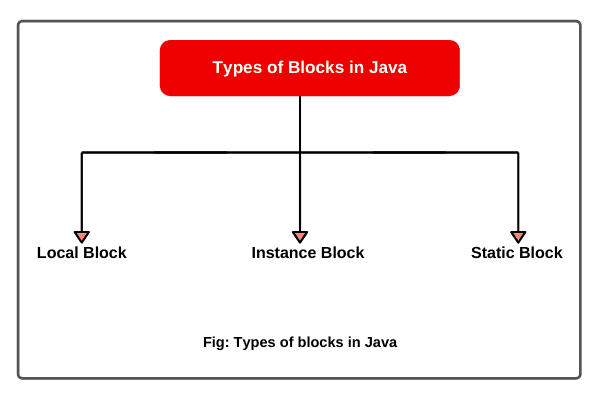 A block can exist entirely within another block or entirely outside and separate from another block, but blocks can never overlap. In the above example, a method contains two opening curly braces, indicating the start of two blocks, the first opening brace, and the last closing brace pair define the outer block whereas, the second opening brace and first closing brace pairs define inner or local block. Thus, we can nest a block statement inside another block statement.

Scope of Variables in Local block

But if you declare a variable with the same name inside the inner block, there is no way for Java to differentiate between these two variables inside the inner block. The following example snippet of code won’t compile.
public static void invalidRedeclarationMethod()
{
int num = 20;
{
int num = 30; // Invalid redeclaration of variable num. A compile-time error.
int num1 = 40; // ok
}

An instance initialization block is also known as non-static block in Java. It is used to write those logic which you want to execute during the object creation. IIB is also used to initialize variables. It will be executed after the execution of static block if any static block is declared.

Static and Non-static variables can be accessed inside the non-static block. Instance block executes before constructor only when an instance of the class is created.

Declaration of IIB in Java

An instance initialization block in Java can be declared by the following syntax.
Syntax of Instance block:
{
// logic here.
}


Let’s see a simple example program where we will declare an instance initialization block and constructor inside a class Test.
Program source code 1:

Which is first executed, Instance initialization block or Constructor?

What is need/use of instance block in Java?

Let’s take an example program to understand the need or use of instance initialization block in java programming.
Program source code 2:

In other words, suppose we are creating 100 objects and for every object, the different constructor is executing but I would like to execute a single instance block during object creation for all objects. This is the main use of IIB which makes it different from the constructor.

Note: Constructor logic is specific to an object but IIB logic is common for all objects.

Order of execution of Instance blocks in Java programming

In Java programming, we can declare multiple instance initialization blocks inside a class and the order of the execution of IIB will always be towards the top to bottom.  Let’s take an example program to understand the concept of order of execution of instance blocks in java.
Program source code 3:

Q. How many times instance block will be executed in the below program?
Program source code 4:

In this example program, since one IIB and two constructors have been declared. First of all, we will check how many objects are created? In this program, only one object is created. So IIB will be executed only one time.

The flow of execution of above program has been shown in the below figure. 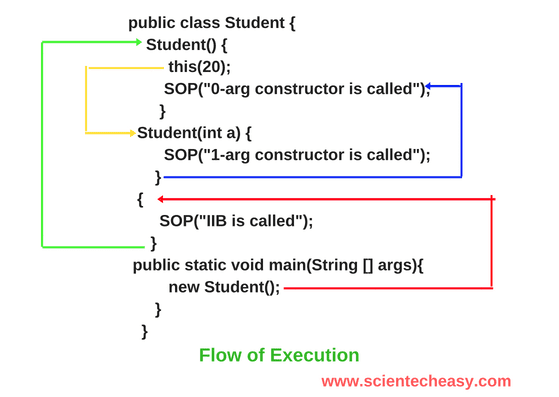 4. The memory is allocated for instance block during object creation.

How to Initialize Variable using IIB?

Instance block is also used to initialize the value to a variable. Let’s see an example program related to it.
Program source code 5:

There are two main advantages of instance initialization block in java. They are as follows:
1. IIB is used to write that logic which has to be executed during object creation before the execution of constructor.
2. IIB is used to initialize the value to a variable.

Difference between Instance block and Constructor in Java

Final words
Hope that this tutorial will have helped you to understand the basic concept of instance initialization block in java with example programs. We have covered almost all important points and example programs related to this topic. I hope that you will have enjoyed programming.
Thanks for reading!

Next ➤ Static variable in Java⏪ PrevNext ⏩