Methods in Java are the building block of a Java application. In Java,  a method is a set of code used to write the logic of the applications which perform some specific task or operation.

When a method is called, it returns the value to the caller. It can also perform a task without returning any value. It can be called from anywhere. Each method has a single entry point and a single exit.

Why do we use methods in Java?

Program source code 1: In this example program, we are performing the addition of two numbers.

class Addition{ // Declare two instance variables. int a=10; int b=20; System.out.println(a+b);// It is invalid syntax because inside the class, we cannot write directly the business logic of the application. Therefore, we declare the method inside the class and write the logic inside the methods. // Declaration of an instance method. void add(){ // Write logic of adding two number and print it on the console. System.out.println(a+b); }

From the above program, it is clear that methods are used to write the business logic of the application or program.

Method declaration in Java with Example


The methods must be declared inside the class. In general, methods have six fundamental parts such as modifiers, method name, return type, parameter list, exception list, and body.

The basic syntax to declare the method is as follows:
Syntax:
method_modifier   return_type   method_name(Parameter_list) throws Exceptions
{
// Method body
}
Let’s discuss some important points about the syntax of method.

1. The method modifier defines the access type of a method but it is optional to use. It may be declared as static, final, abstract, synchronized, or one of the access specifiers private, default, protected, and public. The public is the least restrictive access specifiers and private is the most.

2. If the method is abstract, the implementation is omitted and the method body is replaced with a single semicolon.
3. The return type defines the type of data that comes back from the method after calling it.

The parameter-modifier may be final. If the parameter is final, it cannot be modified inside the method. The data-type may be int, float, char, double, etc. Each parameter-name must be a distinct name.

If there is more than one parameter, they are separated by commas. If there are no parameters, you include an empty pair of parentheses ().

The method parameter list makes it possible to pass the value to the method. It is declared inside the parentheses after the method name and the scope of the parameter list is inside method body but these are optional. The method may also contain zero parameters.

If the return type is void, the method can perform a task without returning any value. Such a method is called void method. There will be no return statement inside the method body.

If the return type is non-void but a data-type like int, float, double, etc, the method will return a value. It will not be possible for execution to reach the end of the method body without executing a return statement.

Key points about Method Signature:
1. The return type and exceptions are not part of the method signature.
2. The method name should be functionality name related to logic.
3. The exceptions may be thrown by the methods. In this case, you can specify the exceptions.

Here are some examples of different types of method declaration in java.
1. public void add(int a, int b);  // Here, add is the functionality/method name. It will execute whenever we will pass input values of a and b.

Once the functionality is completed, void represents don’t return any value. The public is access modifiers which represent that this method can be accessed from anywhere.

2. private int m2(); // m2 is functionality/method name with no argument. Once the functionality is completed, it must return an integer value. The private access modifier represents that it can be accessed only within the class.

3. protected int sub(int a) throws Exception. We will discuss more detail examples of the programs.

Types of methods in Java 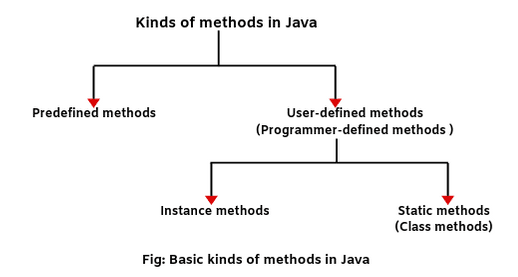 Predefined methods are those methods that are already defined in the Java API (Application Programming Interface) to use in an application. Java Programming language contains predefined classes that are organized in different predefined packages.

These classes have many more thousands of individual predefined methods. All are available to the programmers via Java API.
For example:
1. print() is a predefined method present in the package java.io.PrintSteam. The print(“….”) prints the string inside the quotation marks.

2. sqrt() is a method of Math class which is present in package java.lang. It calculates the square root of a number. Let’ take an example program based on java predefined methods.

Program source code 2: In this example program, we will use sqrt() method of Math class to find out square root of number 16.

When you run the above program, the output will be:

We can declare two types of user-defined methods in an application.

So, without an object of the class, the methods cannot exist to perform their desired behaviors or task. It is allocated in the heap memory during the object creation.
Example of an instance method declaration:
void m1()
{
// This area is called an instanced area/ Non-static area.
// logic here.
}

When you declare any method with a static modifier, it is called static method. A static method is linked with class. Therefore, it is also known as a class method. It is used to implement the behavior of the class itself. Static methods load into the memory during class loading and before object creation.

How to Call Method in Java

Executing code inside the body of a method is called calling a method (or invoking a method). Instance method and static method are called differently.

The syntax to call an instance method is as follows:
Syntax:
instance_reference.instance_method_name(actual parameters);
For example:
You can write the following code to call msg() instance method of Test class.
// Create an object of Test class and stores its reference in ‘t’ reference variable.
Test t = new Test();

To call a static method, we use dot operator with the class name.
For example:
The following code calls m1() static method of Test class.
Test.m1();

Now just remember the below practical concept as shown in the following figure. You can make calling concept easy. 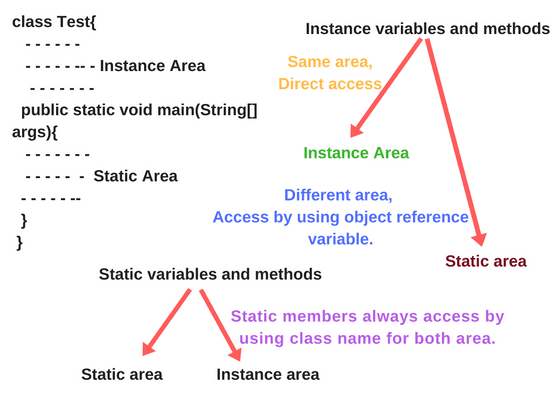 As shown in the above figure, there are two types of areas in Java. First is instance area and second is static area.

2. If you call instance variables or methods from the instance area within the static area (i.e, different area), you cannot call directly them. You will have to use object reference variables for calling them.

5. When a method is called in the program, the control of execution gets transferred to the called method.

How to call Instance method in Java from main

How to call Static method from main in Java

Using the class name, you can directly call a static method from the main method. See in the example program.
Program source code 5:

Let’s understand the flow of execution diagram of this program as shown in the below figure. 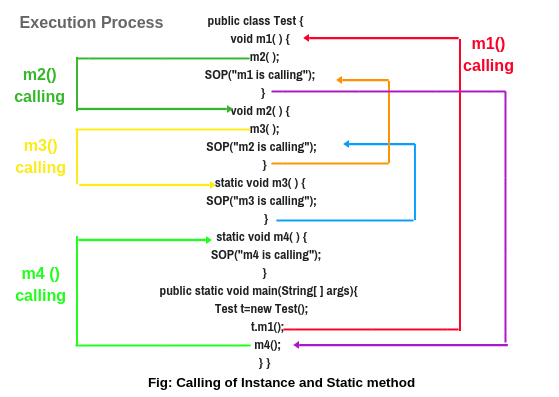 Final words
Hope that this tutorial has covered almost all the important topics related to the methods in Java with example programs. I hope that you will have understood this topic and enjoyed programming.
Thanks for reading!!!
Next ➤ Main method in Java⏪ PrevNext ⏩