When the method of superclass is overridden in the subclass to provide more specific implementation, it is called method overriding in Java.

In other words, When the superclass method has available to subclass by default through inheritance and subclass does not satisfy with superclass implementation then subclass is allowed redefining that method on its requirement. This process is called overriding in Java.
So, if you want to modify a method in any class, then changing method is not a good idea. Instead of that you should extend that class and override that method in a subclass. 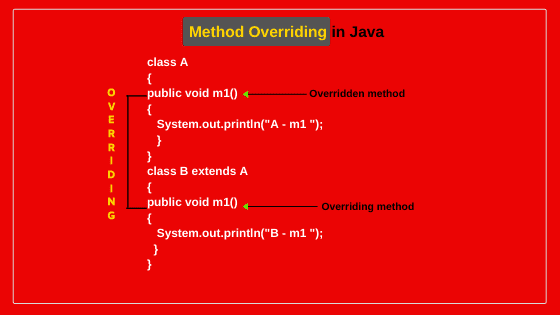 What do we need Method overriding in Java?

Let’s take a simple example program to understand the need for method overriding in Java.
Assume that a young couple wants to marry. They have fixed the date of engagement and marriage. For this, the coding is given below.
Program source code 1:

Output: Engagement will be done on 23 Dec. Marry will be on 27 Dec

Hope that you will have understood the need or purpose of using method overriding in java by this program.

Key points:
The subclass can be written for the following three reasons.
1. To add a new feature or properties. For example, if the student had properties like age and location but in future, we get a new requirement to add one more property address for a student, we should go for extending a class and add a property address in the subclass.
2. To override or change the existing functionality.
3. To inherit the existing functionality.

Features of Method overriding in Java

There are the following features of method overriding in Java. They are as follows:
1. Method overriding technique supports the runtime polymorphism.
2. It allows a subclass to provide its own implementation of the method which is already provided by the superclass.
3. Only the instance method can be overridden in Java.
4. An instance variable can never be overridden in Java.
5. The overriding method can not be more restrictive than the overridden method of the superclass.
6. Overriding concept is not applicable for private, final, static, and main method in Java.
7. Method overriding can be done by changing the covariant return type only.
8. Overriding method cannot throw any checked exception. 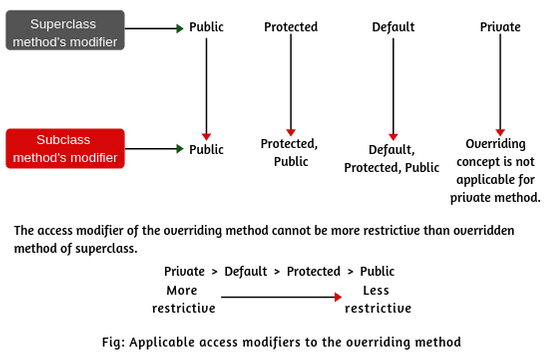 What is @Override annotation in Java? Explain it with example.

@Override is an annotation which is used by the compiler to check all the rules of overriding.
If we do not write this annotation, the compiler will apply only three overriding rules such as
1. Superclass and subclass relation.
2. Method name same.
3. Parameters are the same.

Key points:
In overriding, method resolution is always solved by JVM based on the runtime object. During runtime, the actual object is used for calling the method. In other words, you always check the reference variable is pointing to the objects of which class?

Role of Compiler & JVM in Overriding

Role of compiler in overriding:
During the compile time in the above program (A a1), a1 is a reference variable of parent class A i.e a1 is of parent type. So, the java compiler will be gone to check that m2() method is available or not. If it is available in the parent class, no problem. The code will be happily compiled.

Why method overriding is called as runtime polymorphism?

Let’s consider the program source code 1.
1. We have class A with m2- “A-m2” prints.
2. We have subclass B with m2- “B-m2” prints.
3. Client wrote the main method and in the main,
a. A a1 = new B();
b. a1.m2();
c. Above line is compiled as class A has m2().
d. At runtime, we will get the output of m1 which is there at class B.
e. As at compile time, we think m2 of class A will get called but at runtime m2 of class B got executed because, in method overriding, method resolution is always based on runtime object (new B()). Therefore, it is also called runtime polymorphism or dynamic polymorphism or late binding.

Why cannot private method be overridden?

We cannot override private method because, when superclass method is private that will not be visible to the subclass, whatever methods we writing in the subclass will be treated as a new method but not an overridden method.

Let’s take an example program  where we will declare overridden method as private in the super class and see that it is visible in the sub class or not.
Program source code 5:

Can we override static method?

Can we stop method overriding?

Use of Method overriding in Java

1. Method overriding is used to achieve the runtime polymorphism in Java.
2. It is used to change the existing functionality of the super class method.

👉 Covariant return types in Java with example
👉 Rules of Exception Handling with Method Overriding in Java
👉 10 Main Differences between Overloading & Overriding
Final words
Hope that this tutorial has covered almost all important concepts of method overriding in Java with practical example programs in easy ways. I hope that you will have understood method overriding rules, uses and enjoyed overriding programming.
Thanks for reading!!!
Next ➤ Covariant return types in java⏪ PrevNext ⏩