What is Actions class in Selenium?

Actions in Selenium is a class that allows us to make a sequence of actions that we would like to perform. For example, Press shift button, type something and then release.

In simple words, actions class in selenium are used to perform multiple actions at the same time. For example, double-click, right-click, moving a mouse, drag & drop, etc. These kinds of functionalities in the web application can be done by a special API called Actions API. By using actions API, we can perform either one action at a time or we can perform by queuing up actions one after another.

The actions class also implements the builder patterns by creating a composite action that contains a group of actions specified by method calls.

CompositeAction in selenium is a class that collects all the actions and performs them at the same time. It implements an Action interface.

What is Action in Selenium?

Action in Selenium is an interface that provides us two methods: perform() and build(). These two methods of action interface are implemented by the actions class. Let’s see the build() and perform() methods in detail.

It does not accept anything as a parameter but returns a composite action.
Syntax:
Action action = actions.build();
Since the return type of build() method is action, we will store it by using a variable action of type Action. In the above syntax, actions is a reference variable of the object of actions class.

This method is used to perform a sequence of actions without calling build() first.
Method:

It neither accept anything nor return anything.
Syntax:
action.perform();

How to create an Object of Actions class in Selenium?

Since the actions is an ordinary class, its object is created by using the new keyword. After creating object, we will have to pass the WebDriver object reference as a parameter to its constructor.

The syntax to create an object of actions class is as follows:
Syntax:
Actions actions = new Actions( WebDriver driver);

When you will create an object of the actions class and pass the WebDriver object as a parameter to its constructor, you can access all the methods provided by the Actions class by just typing actions + dot.

The actions + dot (actions.) will provide the list of all methods under the Actions class. You can choose any method according to the requirement of your test case.

Let’s see a glance at the following source code to look at the list of all methods under the actions class.
Program source code 1:

A list of all methods under the actions class can be seen in the below screenshot. 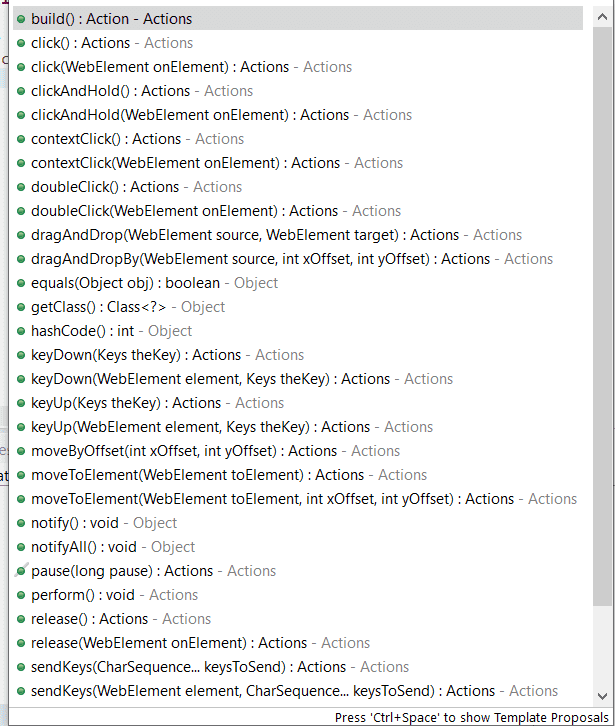 Now let’s move towards to learn about the various types of methods under this Actions class.

There are almost eight important different mouse actions that can be performed by using methods of actions class. They are as follows:

The click() method is used to left-click at the current mouse location. This method does not know where or on which element it is clicking. It just clicks on the current point of location. To perform a composite action, the click() method can also be used in combination with some other methods like moveToElement(), or moveByOffset(). It is also used to perform an action independently.

The click() method does not take any parameter. It returns a self-reference.

Syntax:
actions.click();
The syntax for the click method in combination with another method to make composite action is as follows:
actions.moveToElement(element).click().perform();

This method is used to left mouse click directly in the middle of specified web element.

This method takes an input parameter as an instance (variable) of WebElement on which click action has to be performed. It returns an Actions instance.
Syntax:
actions.click(element);
The above syntax is equivalent to actions.moveToElement(element).click();.

The doubleClick() method is used to perform a double-clicking at the current location of the mouse cursor.

It does not take any input parameters and returns an actions class instance.

This method is used to perform a double-clicking in the middle of the given element.
Method:

This method accepts an input parameter as target web element that has to be double-clicked. It returns an actions class instance.
Syntax:
actions.doubleClick(element).perform();

The contextClick() method is used to perform a right-click at the current mouse location. This method is also called right-click method.
Method:

The preceding method does not accept any input parameter and returns Actions instance.
Syntax:
actions.moveToElement(element).contextClick().perform();
In the preceding syntax, the cursor will first move to the specified location of web element and then right-click on it.

In this example, the cursor will move to the location of element “two” and then perform right-click operation.

It takes an input parameter as an instance of WebElement that has to be right-clicked and returns an actions class.
Syntax:
actions.contextClick(two).perform();

The moveToElement() method is used to move the mouse cursor to the center of a specified element on the web page. The web element is also scrolled into view.
Method:

This method accepts an input parameter as the target web element where the mouse cursor has to be moved.
Syntax:
actions.moveToElement(element).perform();

This method is used to move the mouse cursor from the top-left corner of the web element to an offset position on the web page. The element is scrolled into view and its location is calculated using getBoundingClientRect.

In the above code, xOffset is an input parameter that represents the amount of offset to be moved along the x-axis. If x is a positive value, the mouse cursor will move to the right. The negative value of x is used to move the mouse cursor to the left.

If the xOffset and yOffset values are provided such that they move the cursor out of the document, MoveTargetOutOfBounds exception is thrown.
Syntax:
actions.moveToElement(element, 524, 280).build().perform();

The clickAndHold() method is used to left-clicking on an element and holds it without releasing the left button of the mouse (i.e. without releasing at the current mouse location). This method is generally useful when performing drag and drop operations.
Method:

Syntax:
action.clickAndHold().moveByOffset(300, 200).perform();
In the above syntax, the mouse cursor will click at the current location, move to the location (300, 200) by holding it.

This method is used to left-click and hold web element at the current position of the cursor. It is generally used to move an element by clicking and holding from current position to another position.
Method:

The preceding method takes an input parameter as a WebElement that has to be clicked and held. It returns actions class instance. This method is equivalent to actions.moveToElement(element).clickAndHold();.
Syntax:
actions.clickAndHold(element).moveByOffset(120, 0).perform();
In the above syntax, we have provided a web element to the clickAndHold() method that will be clicked and move to the location by holding it.

The release() method is used to release or to drop an element from the mouse. It can release the left mouse button on a web element.
Method:

The above method does accept any input parameter and returns the actions class instance.

Syntax:
actions.clickAndHold(element).moveByOffset(120, 0).release().perform();
You will get undefined behavior if you attempt to call release() method without calling clickAndHold() method first.

This method takes an input parameter as the target web element where the held web element has to be dropped. The return type of this method is an instance of actions class.
Syntax:
actions.clickAndHold(element1).release(element2).perform();

The dragAndDropBy() method is used to drag a web element on to the location of given offset and drop it.

This method takes three input parameters as target WebElement to be dragged, xOffset parameter, and yOffset parameter.
Syntax:
actions.dragAndDropBy(dragMe, 300, 200 ).perform();
In the above syntax, dragMe is a web element that is identified by its id and the element dragMe is dragged 300 horizontally and 200 vertically.

The keyDown() method is used to perform the action of pressing and holding a key. The keys can be Shift, Ctrl, and Alt keys.
Method:

It accepts an input parameter as either Keys.SHIFT, Keys.ALT or Keys.CONTROL. If the passed key is none of those, IllegalArgumentException is thrown.

You will get undefined behavior if you try to use this method on an unpressed key.

The preceding method is different from sendKeys(CharSequence…) method of WebElement. If the passed keys is null, IllegalArgumentException is thrown.

The overloaded method of sendKeys() method is sendKeys(WebElement target, CharSequence keyToSend). It is equivalent to calling            actions.click(element).sendKeys(keysToSend).

Difference between Action and Actions class in Selenium

Final words
Hope that this tutorial has covered almost all the important points related to Actions class in Selenium WebDriver with examples. In the next tutorial, we will learn some advanced ways of performing complex mouse actions on WebElement such as moving the mouse, double-clicking, dragging and dropping using actions API of Selenium.
Thanks for reading!
Next ➤ How to Click on WebElement & Current Location⏪ PrevNext ⏩