What Is Object-Oriented Programming?

Object-oriented programming (OOP) is a programming methodology or paradigm (model)  to design a computer program using classes and objects. It is the most popular programming paradigm and widely used in the software industry today. It is an extension of procedural programming.

That’s why this new approach is called object-oriented approach in which we write programs using classes and objects. It comes with four main features like encapsulation, abstraction, inheritance, and polymorphism.

Note:
1. Not all languages support OOPs concepts. For example, languages like C, Pascal, Fortran, etc does not implement OOPs features because these are Procedure oriented programming. In these languages, a programmer uses procedures or functions to perform a task.

In an application, objects communicate with each other, they share data among them and solve the problems. The combination of data and functions (methods) in OOP makes an object that is shown in the below figure. 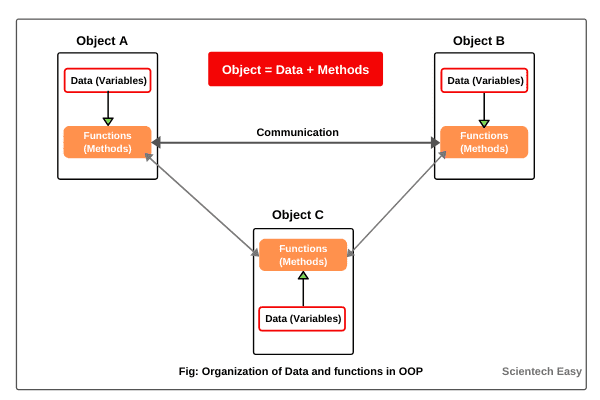 Thus, data is protected and safe from the modification by external functions. In this way, data is hidden in the object-oriented programming language.

Some of the striking features of object-oriented programming paradigm (model/design) are as follows:
1. Higher priority is focused on Data rather than functions.
2. Programs are divided into the number of entities known as objects.
3. Objects communicate with each other through functions (methods).

4. Methods that operate on Data of an object are closely bound together in the data structure.
5. An object is a group of data and methods.
6. Data is hidden in the OOP and cannot be accessed by external methods. Hence, it is safe from accidental modification.

7. Data cannot move freely out of the object.
8. New data and methods can be easily added whenever needs.
9. A bottom-up approach is adopted in programming design. 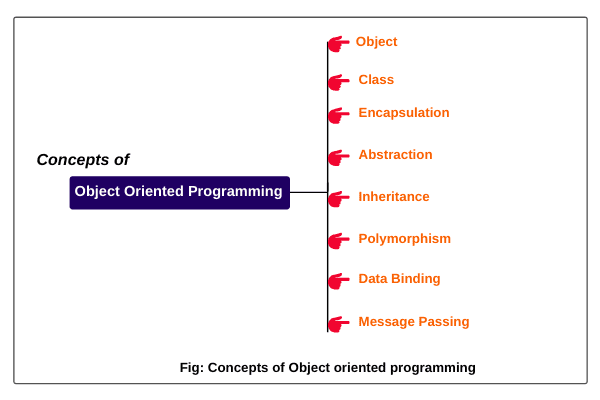 To use variables from outside, we will have to take the help of methods. Thus, encapsulation protects data of a class from members of another class. The reason is that when we create an object of class, each object shares different memory and thus, overwriting of data is not possible.

A realtime example of abstraction is “sending SMS”. When you need to send SMS  from your mobile, you only type the text and send the message. But you don’t know the internal processing about the message delivery.

5. Inheritance: Inheritance is one of the main pillars of the OOP concept. It provides a mechanism for the users to reuse the existing code within the new applications. It does this by allowing the programmer to build a relationship between a new class and existing class and define a new code in terms of existing code. 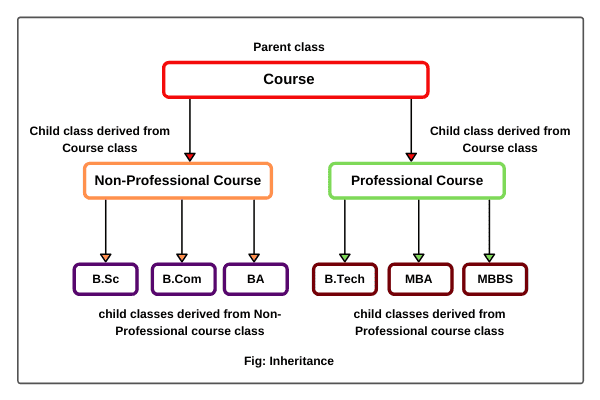 The best real-life example of polymorphism is human behavior. One person can have different behavior. For example, a person acts as an employee in the office, a customer in the shopping mall, a passenger in bus/train, a student in school, and a son at home.

Message passing involves three elements: name of object, name of method, and information to be sent. For example, consider the below statement.
Employee.salary(name);

Here, Employee is name of object, salary is the name of method and name is parameter that contains information.

OOP concepts offer several advantages that are not available in procedural programming like C, Pascal, etc. Some of the major benefits of object-oriented programming in java are as follows: 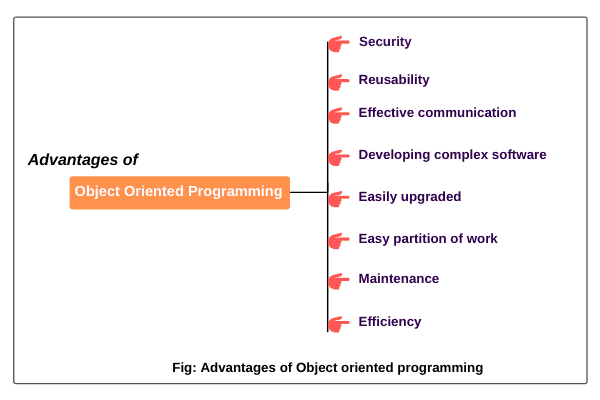 2. Reusability: Through inheritance, we can use the features of an existing class in a new class without repeating existing code that saves a lot of time of developers and also increases productivity.

Applications of OOP in Java

The concepts of OOPs provides many benefits for the programmer to design an efficient program. Due to its reusability feature, it is widely used in many areas. Some of the application areas of OOP are as follows:
a. Real-time systems
b. Object-oriented database
c. Graphical user interface design in the Windows operating system.
d. Artificial intelligence and expert systems
e. Parallel programming
f. CAD/CAM software and in many areas.