Polymorphism in java is one of the core concepts of object-oriented programming language. The word polymorphism is derived from two Greek words: poly and morphs.

The word “poly” implies many and “morphs” mean forms. Therefore, polymorphism means “many forms”. That is, one thing that can take many forms.

Polymorphism is a concept by which we can perform a single task in different ways. That is, when a single entity behaves differently in different cases, it is called polymorphism.

Using polymorphism, we can achieve flexibility in our code because we can perform various operations by using methods with the same names according to requirements. Let’s understand it with realtime examples.

Realtime Examples of Polymorphism in Java

There are several real-time examples of polymorphism in the world. 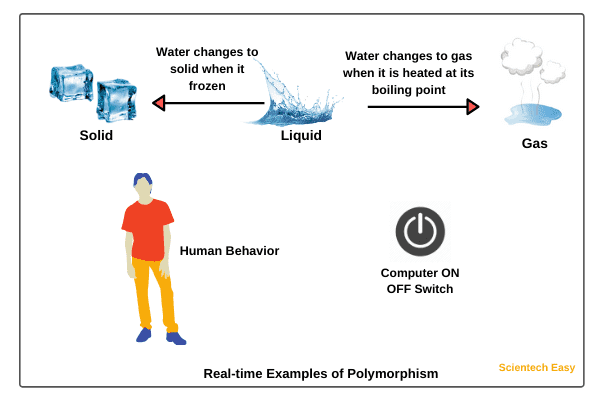 1. We all know that water is a liquid, but it changes to solid when it frozen, and it changes to a gas when it is heated at its boiling point.

2. The best example of polymorphism is human behavior. One person can have different behavior. For example, a person acts as an employee in the office, a customer in the shopping mall, a passenger in bus/train, a student in school, and a son at home.

3. We all use a single button to switch ON and OFF the computer.

Types of Polymorphism in Java 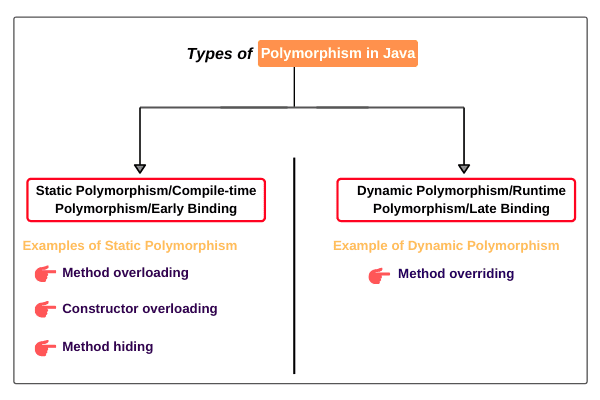 Polymorphism can be either static or dynamic depending on how the method is called in a class.

Method overloading is a mechanism in which a class has multiple methods having the same name but different signatures. It is one of the ways that Java implements polymorphism.

Another example of static polymorphism is constructor overloading and method hiding.

Explanation: As you can observe in the preceding example program, sum() method is overloaded two times because the signatures of both methods are varying in the number of parameters.

When we will call the first sum() method using reference variable “obj” by passing two int type argument values, Java compiler binds the definition of sum(int x, int y) method with sum(20, 10) method during compilation and calls the appropriate method. Hence, the sum of two numbers is displayed by invoking sum() method on the console.

Similarly, when we call the second sum() method by passing three int type argument values, Java compiler binds the definition of sum(int x, int y, int z) with sum(10, 20, 30) method during compilation, and calls a method of the sum of three numbers.

In this way, compile-time polymorphism allows us to perform various operations by using multiple methods with the same name.

therefore, the JVM (Java Virtual Machine) binds the method call with method definition/body at runtime and invokes the relevant method during runtime when the method is called.

This happens because objects are created at runtime and the method is called using an object of the class. The Java compiler has no awareness of the method to be called on an instance during compilation. Therefore, JVM invokes the relevant method during runtime.

Dynamic or runtime polymorphism can be achieved/implemented in java using method overriding. Method overriding is a mechanism where a method of Base class is overridden in the derived class to provide more specific implementation.

The signature of method in both base and derived classes is the same but they only differ in their implementation.

Let’s take an example program where we will implement dynamic polymorphism by method overriding.

Let us consider two classes Base and Derived, as shown in the below code snippet. In both classes, we will declare a method named “calc” having the same signature.
Program source code 2:

As you can observe in the above program, the class Base contains a method named m1. This m1() method is overridden in the derived class named Derived.

Since m1() method in both Base and Derived classes have the same name and signature, therefore, the Java compiler is unable to bind method calls with method definitions.

Hence, on the basis of an object of a class, JVM decides to execute a suitable method at runtime. In this way, method overriding is one way to implement runtime polymorphism in java.

Final words
Hope that you now have a fairly good idea of how dynamic and static polymorphism are implemented in java. I hope that this tutorial has covered all the important points related to polymorphism in java.
Thanks for reading!!!