Substring in Java is a subset of the main string specified by start and end indices. We can extract substrings by using substring() method.

In this example, substring() method obtains a substring from a string that consists of the first five characters taken from the string str.

Look at the below figure to understand better.

As you can see in the above figure, the count characters begin with 0, not 1. The character at the end Index (i.e. at 5 position) is not part of the substring. Therefore, sub is “Hello”.

So, the appropriate substring command is:

If we remove the end position when invoking the substring method, all characters from the beginning position to the end of the string are copied.

String class provides two forms of substring methods. They are as follows:

1. public String substring(int startIndex): This method returns a new string that is a substring of this string. Here, startIndex represents the index at which substring begins with a character.

The substring starts at startIndex and executes until the end of the string. For example,

Here, startIndex is 3. So, it will return characters starting 3rd character till the end of s.


2. public String substring(int startIndex, int endIndex): This method returns a new string of all the characters from starting index up to ending index but not including, the ending index.

It will return characters of s starting from 1st to 2nd position.

Let’s take a simple example program based on the above methods.

1. s1.substring(3,9); will return characters of s starting from 3rd to 8th position and it will be stored in the heap area.

2. s1.substring(5); will return characters starting from 5th character till the end of s1.

Look at the memory concept in the below diagram.

1. What will be the output of the following program?

2. How many string objects will be created in the heap and string constant pool?

Look at the memory concept first. 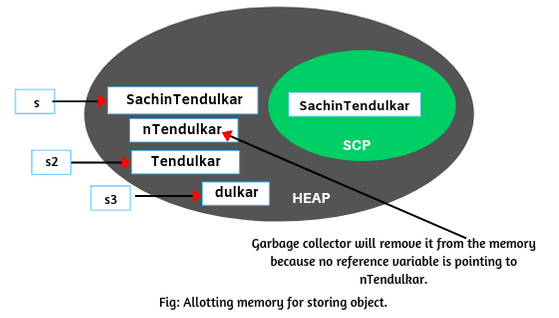 We know that for every string literal, JVM also creates one copy of the object in the string constant pool for future purposes and store content in it.

2. When line s.substring(5); will be executed, substring() will return a new string “nTendulkar” starting from 5th position till the end that is the substring of the original string.

JVM will create a new object in the heap area and store content “nTendulkar” in it. Since we are not pointing any reference variable to it. Therefore, the garbage collector will remove it from memory.

3. During the execution of line String s2 = s.substring(6, 15);, the substring method will create a new string of all the characters from 6th to 15th position of the main string.

JVM will store content “Tendulkar” by creating an object in the heap area. A reference variable ‘s2’  will point to this object by JVM and the output will be “Tendulkar”.

4. Similarly, during the execution of line String s3 = s2.substring(3);, an object with content “Tendulkar” will be called using the reference ‘s2’ by JVM, and substring() method will create a new string “dulkar” starting from 3rd position till the end.

This new string will be stored in the heap area by creating a new object and ‘s3’ will refer to this object. Therefore, the output is “dulkar”.

As you can see in the above figure, a total of 5 objects have been created, one in the string constant pool and four in the heap area. So, the answer is 5.

Hope that this tutorial has covered all important points related to substring in Java with example programs. I hope you will have understood memory concept with diagrams and enjoyed it.
Thanks for reading!!!