You have learned in the previous tutorial that string is fixed-length, immutable and cannot be modified. i.e, Once we create a String object, we cannot change its content.

Before going to discuss three constructors, we have to understand a very important small point. 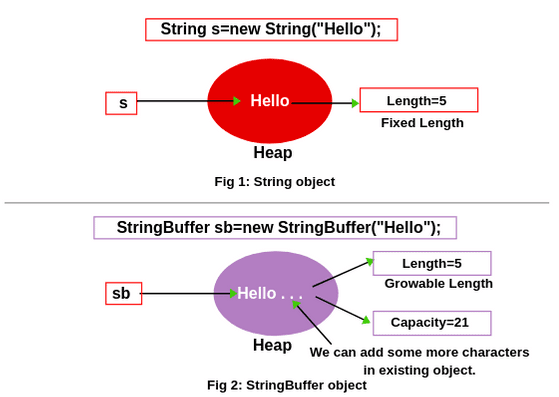 In the above fig 1, we have created a string object with content “Hello”. We have already learned that once we create a string object with content, there is no chance to change its content because the string object is immutable. That means if we cannot change its content, the length of content “Hello” is fixed i.e. 5 and its capacity is also 5 because we cannot add new characters. Therefore, in the string, the terminology length and capacity both are the same. So, string never uses the terminology “capacity”.

But in the case of StringBuffer, there is a small difference between length and capacity.

Capacity: The total number of characters hold in the StringBuffer object is called capacity.

Length: The number of characters already present in the StringBuffer object is called length.

StringBuffer class defines three constructors in Java. They are as follows:

There are three ways to create a string buffer class objects in Java, and fill the object with a string.

StringBuffer sb=new StringBuffer();
Here, we are creating an empty StringBuffer object with a default initial capacity of 16 characters and not passing any string to it. To store a string in it, we can use append() method like this.
sb.append(“Hello”);

Second way: We can create a StringBuffer class object by using the new operator and pass the string to the object.

What is Mutable String in Java?

A string that can be modified or changed into the existing object is known as mutable string. StringBuffer and StringBuilder classes are used to create a mutable string.

Let’s understand the mutable concept with a simple example program and memory concept.

As you can see that in the above figure no new object is created to add “Easy”. It is appended in the existing object because we can perform any required changes in the object when you create a StringBuffer object. This changeable behavior is nothing but mutability. The old object by default will be removed by garbage collector.

Why is String constant pool applicable only for string?

String constant pool is applicable only for string but not for StringBuffer. This is because string is the most common object used in Java whereas StringBuffer is rarely used in the application. Therefore, Java provides special memory management for a string. Without string, you cannot develop any application.

What is the need for StringBuffer if String is already available?

In this section, we will discuss the need for StringBuffer. There is some situation where we will not recommend to use a string concept.
1. When content is fixed and it will not change frequently, String class should be used.

2. If the content is not fixed and frequently changing but thread safety is also required, in this situation, we should use for the StringBuffer class.

Let’s understand the concept with a suitable example.
Suppose that we have a string “Hello” in string constant pool and it is fixed and not changing frequently, we will need string class. Till now there is no problem.
Now suppose that if we want to add content “Java” with string “Hello”, in this case, compulsory a new object will be created with this change because a string object is immutable. We are not allowed to change in the existing object.

Now suppose the content is changing 10 times internally, 10 times new objects will be created if the string will be used. In this situation, performance will be gone to be down. Memory problem will also create in this situation.
To overcome this kind of requirement, we should go for a StringBuffer. If we will use StringBuffer object and 10 times content is changing then still one object will be created. All the required changes will be performed in the existing object only. But if it is string, for every small change, a new object will be created. Due to which memory will waste and performance will be down. This is the biggest advantage of StringBuffer technique.

Key points:
1. In the case of String, for every small change, a new object will be created.
2. If StringBuffer is used, for all required changes will perform in the existing object only. No new object will create.

Final words
Hope that this tutorial has covered almost all the important points related to StringBuffer class in java with suitable example programs. I hope that you will have enjoyed this tutorial.
Thanks for reading!