What is Modifier in Java?

A modifier in java is a keyword that we add to those definitions that we need to change their meaning.

In other words, a modifier limits the visibility of classes, fields, constructors, or methods in the Java program.

The functionality of members of a class or a class itself can be protected from other parts of the program by the presence or absence of modifiers.

Twelve modifiers in java can be divided into two categories:

Access modifiers/specifiers in java define the boundary for accessing members of a class and a class itself.

In other words, access modifiers are those modifiers that are used to restrict the visibility (accessibility) of classes, fields, methods, or constructors.

Java provides four explicit access modifiers in object-oriented programming languages. They are private, default, protected, and public as shown in the below figure. 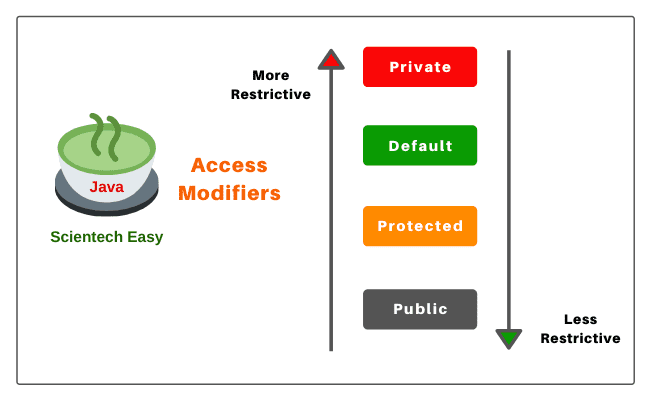 There are the following points about private access modifiers that need to keep in mind.

1. Private access modifier in java can apply to a variable, method, constructor, inner class but not the outer class that is class itself.


3. Private members (field, method, or constructor) of a class cannot be accessed from outside the class. They are accessible only within the class.

4. Private members of a superclass cannot be inherited to the subclass. Therefore, they are not accessible in subclasses.

7. If we declare a method as private, it behaves as a method declared as final. We cannot call the private method from outside the class.

Let us create a program where we will create two classes Class A and Class B. In class A, we will declare field and method as private. When we will access this private field and private method from outside the class B, then they will give a compile-time error. Look at the source code to understand better.

Now, create another class B and call private field and method of class A.

Let’s take an example program where we will declare a constructor of class as private and try to create an object of that class. But, we will get a compile-time error.Program source code 2:

Now, create another class B and call class A from class B. As you will call class A, it will give compile-time error.

Q. Can you find the error in the code?

The only five modifiers are applicable to a top-level class. They are public, default, final, abstract, and strictfp.

By mistake, if you will try to use any other modifiers with top-level class, you will get a compile-time error: “Modifier private not allowed here”.

For more detail, go to this tutorial: Private Constructor in Java

4. Default members can be inherited to the subclass within the same package only. It cannot be inherited from outside the package.

Let’s understand the default access modifier or specifier better with the help of an example program.

In this example program, we have created two packages pack1 and  pack2. We are accessing class A from outside its package since class A is a default, not public. Therefore, it cannot be accessed from outside the package.

1. Protected access modifier can be applied to instance variables, local variables, constructors, methods, inner classes but not the outer class.

2. Protected members are accessible inside the class and everywhere within classes in the same package and outside the package but through inheritance only.

3. Protected members can be inherited to the subclass.

4. If we make constructor as protected then we can create the subclass of that class within the same package but not outside the package

Let’s take an example program to understand the concept of default access modifier.

In this example, we have created two packages pack1 and pack2. The Student class of pack1 package is public. So, it can be accessed from outside the package.

But the name() method of this package is declared as protected. So, it can be accessed from outside the class only through inheritance.

2. Public members of a class can be used anywhere.

3. Public members of a class can be inherited to any subclass.

Let’s understand public access modifier with the help of an example program to understand better.

A variable or field can be declared with two keywords as private and protected together like this:

It provides the visibility level in between the “protected access” and “private access”. This modifier makes the variable visible in all the subclasses regardless of what package they are in but the field cannot be accessed by other classes in the same package.

The below table summarizes the visibility of various access modifiers in java.

1. The only five modifiers are applicable to the outer class. They are public, default, final, abstract, and strictfp.

2. Final and abstract both cannot be applied simultaneously with a class. It is an illegal combination.

3. If a class is declared as public, private, or protected cannot be applied simultaneously with public class. It is also an illegal combination.

2. The non-applicable modifiers for inner class are synchronized, native, transient, and volatile.

1. The only two modifiers out of 12 that are not applicable for methods are transient and volatile.

2. If a method is declared as public, we cannot declare simultaneously private or protected with a public method.

3. If a method is defined as abstract, we cannot apply final, static, synchronized, native, private, or strictfp.

2. The non-access modifiers such as abstract, synchronized, native, and strictfp are not applicable for variables.

3. The only applicable modifier with local variable is final. If a variable is declared as final, we cannot declare as volatile.

1. Static and synchronized modifiers are only applicable for blocks.

1. Public, default, abstract, and strictfp are modifiers that are applicable for outer interface. Except for these modifiers, we cannot apply other modifiers with outer or top-level interface.

1. For inner interface, we can apply modifiers like private, default, protected, public, abstract, static, and strictfp.

2. The non-access modifiers such as final, synchronized, native, transient, and volatile are not applicable for inner interface.

1. The only three modifiers like public, default, and strictfp are applicable for outer enum.

Hope that this tutorial has covered all important points related to access modifiers/specifiers in java with example programs. I hope that you will have understood access modifiers and their applications.
Thanks for reading!!!

Next ⇒ Non-access modifiers in Java