We know that we need a variable to store data. Internally, a variable represents a memory location where data is stored.

When we use a variable in java program, we have to declare first it as:

Here, “x” is a variable that can store int (integer) type data. It means that int represents the nature of data that can be stored into x. Thus, int is called data type in java.

In this tutorial, we will cover the following topics under data types.

A data type in java is a term that specifies memory size and type of values that can be stored into the memory location. In other words, data types define different values that a variable can take.

2. String name = “Deep”; // Here, String is a data type and name is a variable that can take only string values.

The semicolon is used to end a particular statement in java like a pull stop in the English language so that java will know that statement is completed.

Java language provides several data types as shown in the below figure. All data types are divided into two categorized that are as follows: 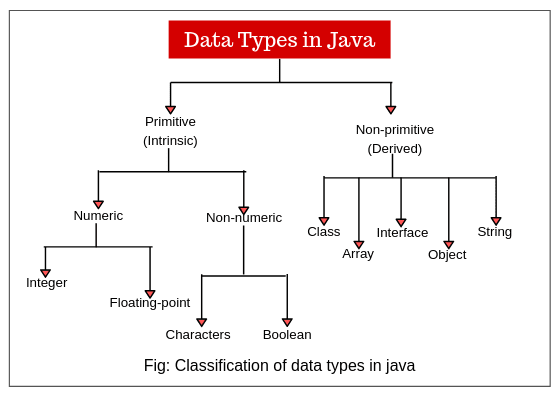 Primitive data types in Java are those data types whose variables can store only one value at a time. We cannot store multiple values of the same type. These data types are predefined in Java. They are named by a Keyword.

All the data types are the keywords that are predefined in Java. They are in small letters.

Now it is important to understand the memory limitations which decide which data type should be used for a particular number. For example,  when we define the age of a person, the age of any person will not cross 120.

In this case, using a short data type is enough instead of using long which will take a big memory. Therefore, you will have to understand the important terms for every data type.

Size of Data Types in Java

For example, if we declare int a; then the size of the memory is defined as 4 bytes.

Every primitive data type has default values defined in java. When the programmer does not declare any value to the variables, default values will be assigned by the JVM during the object creation.

For more details, go to this tutorial: Memory Allocation of Primitive and Non-primitive data types

Range of Data types in Java

The range of value represents min or max value that a data type can hold. When we assign the value of a variable which is not fit in the range of data type, an error or exception will be thrown.

All data types represent both positive and negative numbers. In the programming language, zero is considered a positive number.

These data types represent integer numbers without any fractional parts or decimal points. For example, 225, -56524, 0, 1045, etc. come under this category.

Integer data types are again subdivided into four types: byte, short, int, and long as shown in the below figure. 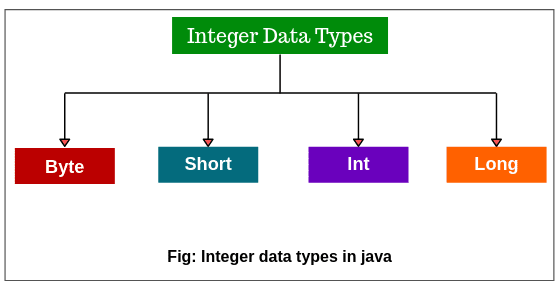 Notes: All java values are signed types (positive or negative). Java does not support unsigned types. Many other computer languages including C/C++ support both unsigned and signed integers.

1. A byte is the smallest integer data type that has the least memory size allocated and it is mostly used to save memory.

6. Variables of type byte are especially used to flow a stream of data from network or file.

For example, a variable of type byte can be declared by using byte keyword as:

Let’s take an example program based on byte data type.

In the preceding example program, we have declared byte data type for variable num with value 100 which is stored into num. A byte represents any value between -128 to 127.

But when you will assign 150 values at the place of 100 to variable num, you would get a compilation problem: Type mismatch error: cannot convert from int to byte because the value is out of the range of byte type. The range of byte is -128 to +127.

1. Short data type has greater memory size than byte and less than Integer.

Let’s create a program based on the short data type.

We cannot use byte data type in the above example because a byte cannot hold 200 value but short can hold the value 200 because of its wider range.

1. This data type is mostly used for integer values in Java programming.

Let’s create a program where we will store two values into a and b with data type int.

1. This data type is mostly used for a huge number where int type is not large enough to store the desired value.

3. Default memory size allocated to this data type is 64 bits i.e 8 bytes and the default value is 0.

Here, -2334456 has been stored into num with type long. L represents that JVM will consider it as a long value and will allot 8 bytes to it.

Let’s create a program where we will calculate the distance traveled by light in 1000 days using long data type. Look at the following source code.
Program source code 4:

It is clear from the above example program that the distance value could not have been held in an int variable.

This is because it will improve the speed of execution of the program and takes less memory size.

There are two kinds of floating-point types: float and double.

1. A float data type is used to represent the decimal number which can hold 6 to 7 decimal digits.

2. It is used to save memory in large arrays of floating-point numbers.

3. The float data type is a single-precision 32-bit IEE 754 floating-point.

4. The default memory size allocated for this data type is 32 bits i.e 4 bytes and default value is 0.0f.

Here, if we do not write “f” then JVM will consider as double and would have allotted 8 bytes. In this case, it will give an error ” Type mismatch: cannot convert from double to float”. But if we use f, JVM will consider it as float value and allot only 4 bytes.

1. A double data type is also used to represent decimal numbers up to 15 decimal digits accurately.

2. The double data type is a double-precision 64-bit IEE 754 floating-point.

Let’s make a program where we will use double variables to calculate the area of circle.

Therefore, double precision is the best choice when we want to store a large number. For example, it can be used for mathematical functions like sin(), cos(), sqrt().

3. Memory size taken by a single char is 2 bytes.

5. A default value for char is ‘u0000’ which represents blank space or single space. Here, ‘u’ represents that character is a Unicode.

Let’s take an example program based on the character data type.

In the above example program, ch1 is assigned value 88 which is an ASCII value, and specifies letter X. ch3 is assigned value A and then it is incremented. So, ch3 will now store B, the next character in the ASCII sequence.

2. It is generally used to test a particular conditional statement during the execution of the program.

In the above all examples, we assigned a value of the variable, assigned value will be printed as output.

Let’s take an example program based on boolean data type.

A flip-flop is a general-purpose register that stores one bit of information (one for true and zero for false).

1. Primitive data types in Java programming is used to store a single value. It is also known as fundamental data types.

3. The basic and most common data types are integer, floating-point number, character, string, and boolean.

In the next tutorial, we will learn Java reference data types.Next ⇒ Non-primitive data types in Java⇐ PrevNext ⇒