Errors in Java occur when a programmer violates the rules of Java programming language.

It might be due to programmer’s typing mistakes while developing a program. It may produce incorrect output or may terminate the execution of the program abnormally.

For example, if you use the right parenthesis in a Java program where a right brace is needed, you have made a syntax error. You have violated the rules of Java language.

Therefore, it is important to detect and fix properly all errors occurring in a program so that the program will not terminate during execution.

Types of Errors in Java Programming

When we write a program for the first time, it usually contains errors. These errors are mainly divided into three types: 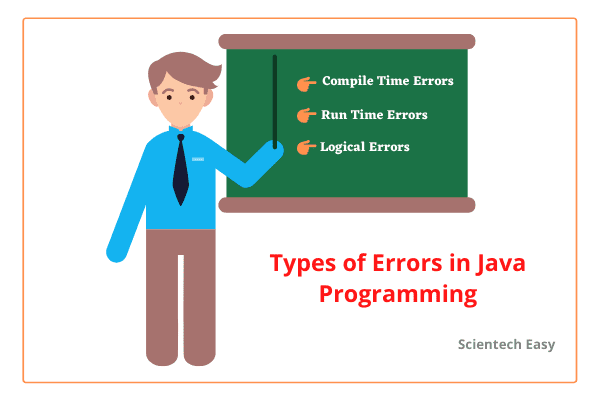 Compile-time errors occur when syntactical problems occur in a java program due to incorrect use of Java syntax.

These syntactical problems may be missing semicolons, missing brackets, misspelled keywords, use of undeclared variables, class not found, missing double-quote in Strings, and so on.

These problems occurring in a program are called syntax errors in Java.


Since all syntax errors are detected by Java compiler, therefore, these errors are also known as compile time errors in Java.

When Java compiler finds syntax errors in a program, it prevents the code from compile successfully and will not create a .class file until errors are not corrected. An error message will be displayed on the console screen.

These errors must be removed by debugging before successfully compile and run the program. Let’s take an example program where we will get a syntax error.

When you will try to compile the above program, Java compiler will tell you where errors are in the program. Then you can go to the appropriate line, correct error, and recompile the program.

Let’s create a program where we will try to call the undeclared variable. In this case, we will get unresolved compilation problem.

We may also face another error related to the directory path. An error such as

means that you have not set the path correctly.

Runtime errors occur when a program is successfully compiled creating the .class file but does not run properly. It is detected at run time (i.e. during the execution of the program).

Such a program that contains runtime errors, may produce wrong results due to wrong logic or terminate the program. These runtime errors are usually known as exceptions.

For example, if a user inputs a value of string type in a program but the computer is expecting an integer value, a runtime error will be generated.

The most common runtime errors are as follows:

1. Dividing an integer by zero.
2. Accessing an element that is out of range of the array.
3. Trying to store a value into an array that is not compatible type.
4. Passing an argument that is not in a valid range or valid value for a method.
5. Striving to use a negative size for an array.
6. Attempting to convert an invalid string into a number.
7. and many more.

When such errors are encountered in a program, Java generates an error message and terminates the program abnormally. To handle these kinds of errors during the runtime, we use exception handling technique in java program.

Let’s take different kinds of example programs to understand better. In this program, we will divide an integer number by zero. Java compiler cannot detect it.

The above program is syntactically correct. There is no syntax error and therefore, does not cause any problem during compilation. While executing, runtime error occurred that is not detected by compiler.

The error is detected by JVM only in runtime. Default exception handler displays an error message and terminates the program abnormally without executing further statements in the program.

Let’s take an example program where we will try to retrieve a value from an array using an index that is out of range of the array.

Logical errors in Java are the most critical errors in a program and they are difficult to detect. These errors occur when the programmer uses incorrect logic or wrong formula in the coding.

The program will be compiled and executed successfully but does not return the expected output.

Logical errors are not detected either by Java compiler or JVM (Java runtime system). The programmer is entirely responsible for them. They can be detected by application testers when they compare the actual result with its expected result.

For example, a programmer wants to print even numbers from an array but he uses division (/) operator instead of modulus (%) operator to get the remainder of each number. Due to which he got the wrong results.

Let’s see the following source code related to this problem.

As you can see the program is successfully compiled and executed but the programmer got the wrong output due to logical errors in the program.

Seldom does a program run successfully at its first attempt. A software engineer in a company also commits several errors while designing the project or developing code.

These errors in a program are also called bugs and the process of fixing these bugs is called debugging.

All modern integrated development environments (IDEs) such as Eclipse, NetBeans, JBuilder, etc provide a tool known as debugger that helps to run the program step by step to detect bugs.

If you need professional help with Java homework assignments online, please address experts from AssignmentCore to get your Java projects done with no errors.

In this tutorial, we have familiarized different types of errors in java that may possibly occur in a program.
Thanks for reading!!!
Next ⇒ Exception handling Interview Programs for Practice