A value which is fixed and does not change during the execution of a program is called constants in java.

In other words, Java constants are fixed (known as immutable) data values that cannot be changed.

Java supports various types of constants. They are as follows: 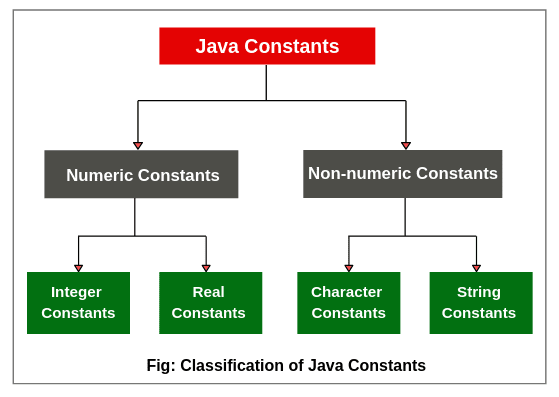 Decimal integer is a sequence of digits from 0 to 9. These constants are either positive or negative. Plus sign is optional.

An octal integer constant is a sequence of any combination of digits from 0 to 7. Octal integer always starts with 0. The digits 8 and 9 are not valid in octal notation.

The valid examples of hexadecimal integer constants are 0x23, 0x5B, 0x9F, 0x, etc. “x” can also be either small or capital.

We rarely use octal and hexadecimal integer numbers system in programming.

Let’s create a program to study decimal, octal, and hexadecimal notation for integers.

It has the following general form:

mantissa is either integer number or a real number expressed in decimal notation. The term exponent is an integer with an optional plus or minus sign.

Embedded (blank) space is not permitted in any numeric constants. Exponential notation is useful to represent either very small or very large number in magnitude.

The last constant is blank space. The character constant ‘5’ is not equivalent to the number 5.

Java provides some special backslash character constants that are used in output methods. For example, the symbol ‘n’ which stands for newline character.

There are various types of backslash character constants that are supported by java. The list is given in the below table.

Hope that this tutorial has covered almost all important points related to constants in java with example programs. I hope that you will have understood this tutorial and enjoyed it.
Thanks for reading!!!
Next ⇒ Operators in Java⇐ PrevNext ⇒