In this tutorial, we will learn life cycle of object in Java step by step.

We should know how objects are born, live their life, and then die at the end.

There are following steps come in the life cycle of an object in java. They are as follows: 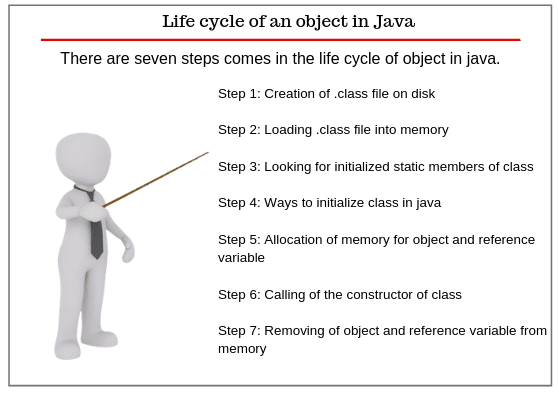 As you know that Java programs run on the Java virtual machine (JVM). When we compile the Java class, it is transformed into byte code which is platform and machine-independent. The compiled classes are stored as a .class file on a disk.

After that, the Java runtime finds out that class on the disk that is in the form of a .class file. Java classloader loads that class into memory and then  Java runtime reads it into the memory.

Now Java looks for all initialized static members of the class such as static method, static field, and static block.

You always remember that all the static members of the class do not belong to any particular instance of the class. It belongs to the class itself and is shared by all the objects created from the class.

A class can be initialized in two ways in Java. First, when you access a static field or static method of the class.

Step 5: Allocation of memory for object and reference variable

Step 6: Calling of the constructor of class

After allocating the memory, JVM calls the constructor of the class which is like a method but it is called only once when the object is created.

Thus, the object lives its life and providing access to its fields and methods whatever we want and need to access them.

Step 7: Removing of object and reference variable from memory

When the accessing of field and methods are completed, the object and its reference are removed from the memory by the JVM. At this time the object has died.

You don’t have to destroy objects yourself. Actually, when the object is no longer in use, Java runtime calls the garbage collector to destroy all the objects. Thus, objects are born, live, and die.

Hope that this tutorial will have covered all the important points related to life cycle of object in Java. I hope that you will have understood how objects are born, live their life, and then die at the end.