In this tutorial, we will familiar with basic concepts of classes and objects in Java with realtime examples.

The underlying structure of all java programs is made up of classes. Anything we want to write in a java program must be encapsulated in a class.

In this chapter, we will know the following topics under classes and objects in Java. So, let’s see one by one.

Characteristics of an object in Java

An object has three characteristics:

2. Behavior: Behavior represents functionality or actions. It is represented by methods in Java.

Let’s take a real-world example to understand all these points clearly.

Realtime Examples of Objects in Java

We are taking the example “person”. A person has three characteristics: Identity (name), State (properties), and behavior (actions or functionality). Look at the below figure. 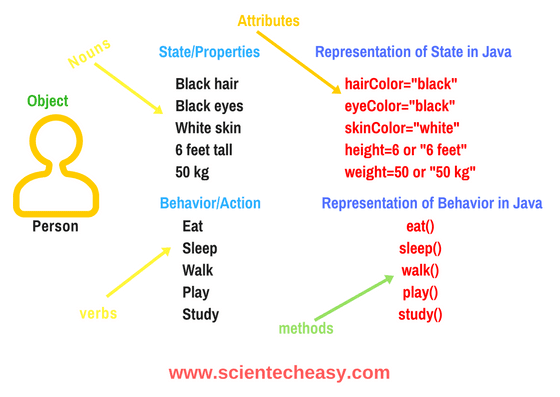 In the above figure, a person is an object. First state of the person (object) is black hair which can be represented in Java like this: hairColor = “black”.


In the same way, second property of the object is eye color which can be represented in Java like eyeColor = “black” and so on. These are called attributes that define the properties of a person.

Thus, when properties and actions are combined together of any real-world object make an object in Java.

Let’s take one more interesting example ‘Phone Samsung Galaxy’. If I tell you to represent this phone in java in the form of an object then How will you do like that?

You can do that very easily. Ask two questions: What it has? (Properties)   and What it does? (Actions)

Actions/Behavior are call(), sendSms(), runApp(), browserInternet(), sharing(). Thus, a phone object is comprised of the properties that the phone has actions that phone does.

Another example we can take “Pencil”. A pencil is an object. Its name is Natraj.

Behavior: It is used to write. So, writing is behavior.

Thus, you can take any object around you and think about what property it has? and What action it does?

In Java programming, a class is basically user-defined data types that act as a template for creating objects of the identical type. It represents the common properties and actions (functions) of an object.

In other words, a class can also be defined as “a class is a group of objects which are common to all objects of one type”.


A class is the type of object. Let’s understand it with realtime examples.

Realtime Examples of Class in Java

Both objects have some different properties and actions but the type is the same “Phone”. This is the class. i.e the name of the class is “Phone”.

Declaration of Class in Java

A class can be declared using the keyword class followed by a class name. It has also a body within braces. The general syntax to declare a class in Java is shown below:

Components of Class in Java

In general, a class can have the following components to act as a template. It can be seen in the below figure and a brief explanation is given below.

2. Class name: By convention, a class name should begin with a capital letter and subsequent characters lowercased (for example Student). If a name consists of multiple words, the first letter of each word should be uppercased ( for example CollegerStudent).

A class name can also start with an underscore ”_”. The following class name can be valid such as _, _Student. Keywords cannot be a valid class name. For example, class, true, null, etc are not accepted as a class name.

3. Body: Every class’s body is enclosed in a pair of left and right braces. In the body,  a class can contain the following members.

If you are writing a simple program, everything must reside inside the body of the class. Let’s see in brief about all the members of the class.

Fields: Fields are data member variables of a class that stores data or value in it. It specifies the state or properties of the class and its object. It may be a local variable, instance variable, or static variable.

Constructor: A constructor is used to create an object. Every class must be at least one constructor otherwise, no object can be created of the class.

Method: A method defines action or behavior of the class that a class’s object can perform. It has a body within braces. In the body, we write code that performs actions. It may be an instance method or a static method.

Block: A block is mostly used to change the default values of variables. It may be an instance block or static block.

Interface: An interface in Java is a mechanism that is used to achieve complete abstraction. It is basically a kind of class but can have only abstract method declarations and constants as members.

It is used to achieve multiple inheritances in Java. You will learn more details about the interface in the further tutorial.

Flow of Execution of Program in Java

1. Out of five elements declared inside the class body, the static variable, static block, and static method are executed first during the loading of the dot class file.

2. The instance variable is executed during object creation.
3. When the object is created, first, an instance block is executed before the execution of a constructor.

A simple programming structure of Class and Objects in Java

Let’s understand a simple programming structure of class and objects in Java. Suppose, Student is a class name and the name, rollNo, id, age of student will be its properties. The “public” is the access modifier.

Let’s implement these properties in a program.

Key points:
1. You can create any number of objects of a class.
2. The process of creating an object of a particular class is called instantiating of an object.
3. The object is called an instance of class.

Difference between Class and Object in Java

Can we call Class as Data type in Java?

Yes, a class is also considered as user-defined data types. This is because a user creates a class.

2. Objects are the basic runtime entities in object-oriented systems.
3. All objects in a system take a separate memory space independently of each other.
4. A class in OOPs represents a group of similar objects.

5. Once a class has been created, any number of objects belonging to that class can be created.
6. An object of a class is also known as an instance.
7. A class never represents an object, rather it represents data and actions that an object will have.
8. Members of a class consist of variables (data members) and methods (member functions).

Thanks for reading!!!Next ⇒ How to create object in Java