Here, we have listed the best collection of frequently asked Selenium WebDriver Interview Questions and the best possible answers to crack the interview.

3. What is Selenium? What are the different components of selenium?
🅰 Selenium is a free and open-source browser automation testing tool which is used to test the functionality of web based application. It supports different operating systems and different languages. It is originally developed by Jason Huggins in 2004.There are four components available in selenium suite to automate the web application.
1. Selenium IDE (Integrated Development Environment)
2. Selenium Remote Control (RC)
3. WebDriver
4. Selenium Grid
4. Why should Selenium be selected as a testing tool?
🅰 There are the following reasons to select selenium as a testing tool.
1. Selenium is free and open-source.
2. It supports different operating systems like Windows, Mac OS, and Linux.
3. It supports different programming languages such as Java, C#, Python, Perl, Ruby, and PHP. We can code in Java, Python, C#, etc.
4. It supports almost all popular browsers like Chrome, Firefox, Opera, IE, etc.
5. Selenium supports cross-browser compatibility (Chrome, Firefox, or IE).

🅰 Selenium 1.0 or Selenium Remote Control (popularly known as Selenium RC) is a freeware automated testing tool that allows testers to test web-based applications. It was developed to extend framework in multiple programming languages. It is composed of Selenium IDE, Selenium Core, Selenium RC, and Selenium Server.

6. What is Selenium 2.0?
🅰 Selenium 2.0 (also known as WebDriver) is the latest, free, and open-source library to automate web applications. It is a pure object-oriented tool. This powerful tool was developed in 2008 when Selenium RC was merged with another testing framework called WebDriver.
7. What are the types of testing supported by selenium?
🅰 Selenium supports different types of testing. They are as follows:
a. Functional Testing
b. Regression Testing
c. Retesting
d. Acceptance Testing
e. End-to-End Testing
f. Smoke Testing
g. Sanity Testing
h. Responsive Testing
i. Cross Browser Testing
k. UI Testing
l. Integration Testing
8. What are four parameters that have to pass in Selenium?
🅰 Four parameters that have to pass in selenium, are Host, Port Number, Browser, and URL.
9. What are the limitations of Selenium?
🅰 There are the following limitations of Selenium. They are:
1. Selenium supports the testing of only web applications.
2. Captcha and barcode cannot be tested by using selenium.
3. Mobile applications cannot be tested by using Selenium.
4. Test reports can only be generated using third-party tools like JUnit or TestNG.
10. What is the difference between Selenium and QTP?
🅰 There are many differences between Selenium and QTP.
1. Open/Licensed: Selenium is a free and open-source whereas, QTP is a licensed tool.
2. Operating system: Selenium supports various operating systems like Windows, Mac OS, and Linux whereas, QTP supports only Windows operating system. 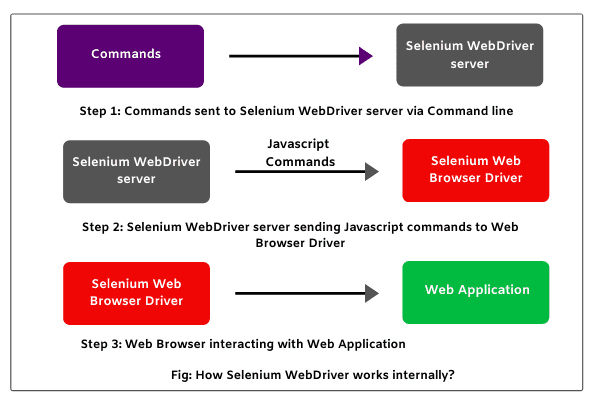 🅰 We assign the FirefoxDriver object to WebDriver reference because it allows assigning driver object with different browser drivers. If we want to switch other browsers in the same program for multiple browser testing, we will have to create multiple objects for different browsers that are the worst kind of programming. Therefore, we create a WebDriver reference and assign an object of class.

14. What is difference between WebDriver and FirefoxDriver?

16. What is Firebug?
🅰 Firebug is a Firefox addon which is used to inspect HTML web elements on the web page during a test.

19. What is HTMLUnitDriver in Selenium?
🅰 HTMLUnitDriver is the fastest and most lightweight web browser for implementation of WebDriver. It has no GUI (Graphical User Interface).  Since, in HTML unit driver, test run in the background without any visual interruption, we cannot see test execution on the screen. Hence, test execution becomes faster than other drivers.

1. How to open a Website using Selenium WebDriver?
🅰 The get() method is used to open the specified URL in the current browser window. The URL must be in the form of http://www.xyz.com. If the http is not included then it will throw a message “Cannot navigate to invalid URL”.
The syntax is as follows:
WebDriver driver = new FirefoxDriver();
driver.get(“https://www.xyz.com“);

2. How to click on a button of web page?

🅰 click() method is used to click on a button of web page. The syntax is given below:
driver.findElement(By.id(“submit”)).click();

3. How to get Page Title of web page using Selenium WebDriver?
🅰 getTitle() method of WebDriver is used to get page title of any web page. The syntax is as follows:
String pageTitle = driver.getTitle();
System.our.println(pageTitle);
4. How to get a text from a specified element or object on web page?
🅰 The getText() method is used to retrieve inner text of specified element on web page. The syntax is given below:
Syntax:
driver.findElement(By.locatorName(“Specified Element”)).getText();
5. How to compare page title on web page with expected title in Selenium WebDriver using Java?
🅰 We will verify or compare the title of the web page in Selenium WebDriver using the String concept of Java. Let’s see the main source code.

String actualTitle = driver.getTitle(); String expectedTitle=”Facebook – log in or sign up”; // Use equalsIgnoreCase() method of String class to verify actual title with expected title. if(actualTitle.equalsIgnoreCase(expectedTitle)) { System.out.println(“Verification is success” ); System.out.println(“Home page title is:” + actualTitle ); } else { System.out.println(“Verification is failed, Matched not found”); }6. What is difference between driver.get() and driver.navigate() method?
🅰 The difference between get() and navigate() methods of Selenium WebDriver are as follows:
1. The driver.get() method is used to open a specified URL of web application and wait until the whole page gets loaded whereas, driver.navigate().to() method is used to navigate a specified URL of web application and it does not wait till the whole page gets loaded.

7. What is the difference between close and quit methods of Selenium WebDriver?