Life Cycle of Thread in Java is basically state transitions of a thread that starts from its birth and ends on its death.

When an instance of a thread is created and is executed by calling start() method of Thread class, the thread goes into runnable state.

When sleep() or wait() method is called by Thread class, the thread enters into non-runnable state.

When the thread comes out of run() method, it dies. These state transitions of a thread are called Thread life cycle in Java.

A thread is a path of execution in a program that enters any one of the following five states during its life cycle. The five states are as follows: 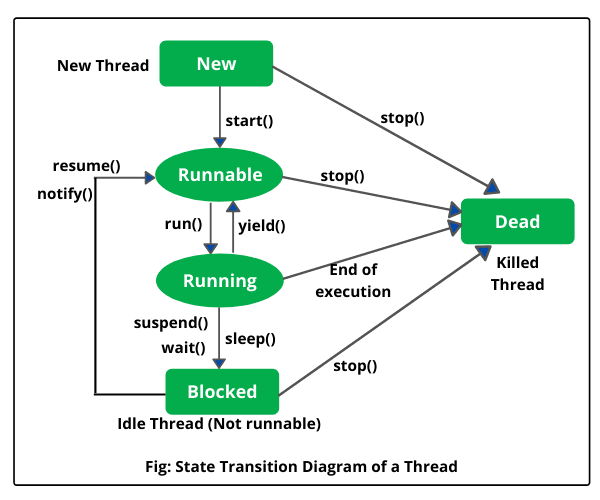 1. New (Newborn State): When we create a thread object using Thread class, thread is born and is known to be in Newborn state. That is, when a thread is born, it enters into new state but the start() method has not been called yet on the instance.

In other words, Thread object exists but it cannot execute any statement because it is not an execution of thread. Only start() method can be called on a new thread; otherwise, an IllegalThreadStateException will be thrown.

In runnable state, thread is ready for execution and is waiting for availability of the processor (CPU time). That is, thread has joined queue (line) of threads that are waiting for execution.

If all threads have equal priority, CPU allocates time slots for thread execution on the basis of first-come, first-serve manner. The process of allocating time to threads is known as time slicing. A thread can come into runnable state from running, waiting, or new states.

3. Running state: Running means Processor (CPU) has allocated time slot to thread for its execution. When thread scheduler selects a thread from the runnable state for execution, it goes into running state. Look at the above figure.

In running state, processor gives its time to the thread for execution and executes its run method. This is the state where thread performs its actual functions. A thread can come into running state only from runnable state.

A running thread may give up its control in any one of the following situations and can enter into the blocked state.

a) When sleep() method is invoked on a thread to sleep for specified time period, the thread is out of queue during this time period. The thread again reenters into the runnable state as soon as this time period is elapsed.

b) When a thread is suspended using suspend() method for some time in order to satisfy some conditions. A suspended thread can be revived by using resume() method.

c) When wait() method is called on a thread to wait for some time. The thread in wait state can be run again using notify() or notifyAll() method.

4. Blocked state: A thread is considered to be in the blocked state when it is suspended, sleeping, or waiting for some time in order to satisfy some condition.

5. Dead state: A thread dies or moves into dead state automatically when its run() method completes the execution of statements. That is, a thread is terminated or dead when a thread comes out of run() method. A thread can also be dead when the stop() method is called.

During the life cycle of thread in Java, a thread moves from one state to another state in a variety of ways. This is because in multithreading environment, when multiple threads are executing, only one thread can use CPU at a time.

All other threads live in some other states, either waiting for their turn on CPU or waiting for satisfying some conditions. Therefore, a thread is always in any of the five states.

In this tutorial, we have covered life cycle of thread in Java and thread states with helpful diagrams. Hope that you will have understood the basic concept of thread life cycle.

If you get any incorrect in this tutorial, then please inform our team through email. Your email will be precious to us.
Thanks for reading!!!
Next ⇒ Creating Multiple Threads in Java⇐ PrevNext ⇒