➲ ArrayList in Java is a resizable-array that can grow or shrink in the memory whenever needed. It is dynamically created with an initial capacity.

It means that if the initial capacity of the array is exceeded, a new array with larger capacity is created automatically and all the elements from the current array are copied to the new array.

➲ Elements in ArrayList are placed according to the zero-based index. That is the first element will be placed at 0 index and the last element at index (n-1) where n is the size of ArrayList.

➲ Java ArrayList uses a dynamic array internally for storing the group of elements or data.

➲ The capacity of ArrayList does not shrink automatically. When elements are removed from the list, the size of array list can be shrunk automatically but not capacity.

The hierarchy diagram of ArrayList class is shown in the below figure. 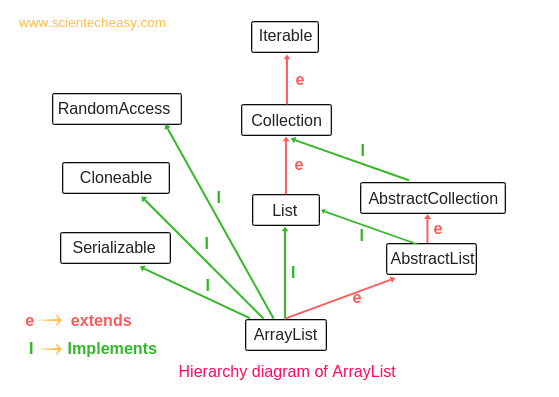 A marker interface is that interface which does not have any methods or any member variables. It is also called an empty interface because of no field or methods.

1. RandomAccess Interface is a marker interface that does not define any method or member. It is introduced in Java 1.4 version for optimizing the list performance.

3. ArrayList class implements a random access interface so that we can access any random element at the same speed. For example, suppose there is a group of one crore objects in the array list. Assume that the first element is x, 10th element is y, and 1st crore element is z.

Thus, Any random element we can access with the same or constant speed. Therefore, if our frequent operation is retrieval operation then ArrayList is the best choice.

1. A serializable interface is a marker interface that is used to send the group of objects over the network. It is present in the java.io package.

2. It helps in sending the data from one class to another class. Usually, we use collections to hold and transfer objects from one place to another place. To provide support for this requirement, every collections class already implements Serializable and Cloneable.

1. A cloneable interface is present in java.lang package.

Features of ArrayList in Java

There are several features of ArrayList class in Java. They are as follows:

1. Resizable-array: ArrayList is a resizable array or growable array that means the size of ArrayList can increase or decrease in size at runtime. Once ArrayList is created, we can add any number of elements.

4. Null elements: Any number of null elements can be added to ArrayList.

7. Synchronized: ArrayList is not synchronized. That means multiple threads can use the same ArrayList objects simultaneously.

8. Random Access: ArrayList implements random access because it uses an index-based structure. Therefore, we can get, set, insert, and remove elements of the array list from any arbitrary position.

9. Performance: In ArrayList, manipulation is slow because if any element is removed from ArrayList, a lot of shifting takes place. For example, if an array list has 500 elements and we remove 50th elements then the 51st element will try to acquire that 50th position, and likewise all elements. Thus, it consumes a lot of time shifting.

Java ArrayList class provides three constructors for creating an object of ArrayList. They are as:

We can create an object of ArrayList class in java by using any one of three constructors. Let’s see one by one.

1. The syntax for creating an instance of ArrayList class is as:

It creates an empty ArrayList with a default initial capacity of 10. In this array list, we can store only 10 elements as shown in the below diagram. Suppose we insert the 11th element at 10th position into an array list, what will happen internally?

Once ArrayList is reached its maximum capacity, the ArrayList class automatically creates a new array with a larger capacity.

The old default array list with the collection of objects is automatically gone into the garbage collection. Similarly, If we try to insert 17th element, new capacity= 16*3/2 + 1 = 25.

2. We can also initialize the capacity at the time of creating ArrayList object.  The syntax for creating an instance of ArrayList class with initial capacity is as:

It creates an empty ArrayList with initial capacity. If you know the initial capacity, you can directly use this method. Thus, we can improve the performance of the system by default.

For example, suppose our requirement is to add 500 elements in the array list, we will create ArrayList object like this:

3. We can also create an object of ArrayList class by initializing a collection of elements into it. The syntax is as follow:

It creates an ArrayList object by initializing elements of collection c.

Java 1.5 version or later also provides us to specify the type of elements in the ArrayList object. For example, we can create a generic String ArrayList object like this:

Note: We cannot use primitive data types as a type. For example, ArrayList<int> is illegal.

There are three methods to initialize the array list in Java. They are as follows:

1. Using Arrays.asList: The syntax to initialize an ArrayList using asList() method is as follows:

3. Using Anonymous Inner class: The syntax for initialization of ArrayList in java using anonymous inner class is as:

ArrayList also provides some useful methods. They are as follows:

3. boolean addAll(int index, Collection c): This method is used to add a group of elements at a specified position in a list. For example:

4. void add(int index, Object o): It is used to add an element at a particular position index in the list. For example:

Let’s take an example program based on the above ArrayList add() methods.
Program source code 1:

In the preceding example program, we have used duplicate elements, heterogeneous elements (i.e String and integer), and a null element. You will also notice that when a specified element is added at a particular position, the right side element is shifted one position right.

After shifting, the object reference variable will reassign a new array list as shown in the above picture. Due to shifting, ArrayList is also time-consuming.

In the output, we are getting square bracket notation for this ArrayList. This is because when we try to print an object reference variable, internally it calls toString() method like this:

5. boolean remove(Object o): It removes the first occurrence of the specified element from this list if it is present.

6. void remove(int index): This method removes the element from a particular position in the list. Look at the examples below.

7. void clear(): The clear() method is used to remove all elements from an array list.

8. void set(int index, Object o): The set() method replaces element at a particular position in the list with the specified element. For example, suppose we want to replace an element “A” at a position 2 with an element “a” in the list, we will have to call this method as:

Let’s take an example program where we will remove an element using remove() method from the list.

Any subsequent elements at the right side in the array is automatically shifted towards one position left to fill empty slot that was occupied by deleted element and object reference variable ‘al’ will be reassigned to the new array list like as shown in the above diagram.

9. Object get(int index): It returns the element at the specified position in this list.

11. boolean contains(Object o): It returns true if a specified element is present in the list, else, returns false. Look at the examples below.

Let’s see an example program based on these methods.

12. int indexOf(Object o): It is used to get the index of the first occurrence of the specified element, if the element is not present in the list, it returns the value -1.

13. int lastIndexOf(Object o): It is used to get the index of the last occurrence of the specified element in the list. If the element is not present in the list, it returns -1. For example:

How do we manually increase or decrease current capacity of ArrayList?

When to use ArrayList in Java?

ArrayList can be used in an application program when

Hope that this tutorial has covered almost all important points related to ArrayList in Java with example programs. I hope that you will have understood ArrayList methods and enjoyed programming.