When an object of one class is created as a data member inside another class, it is called Has-A relationship.

Let’s understand Has-A relationship with the help of different kinds of examples.

1. A most common example of Has-A relationship in Java is “A person has an address”.

In Java, there is no special feature by which we can identify the Has-A relationship in the code.

Person class has an instance variable of type Address as shown in the below code. An instance of Address class is created outside of Person class.


Look at the above figure where an object of class Address is created as a data member inside another class Person. This relationship is known as Has-A relationship. 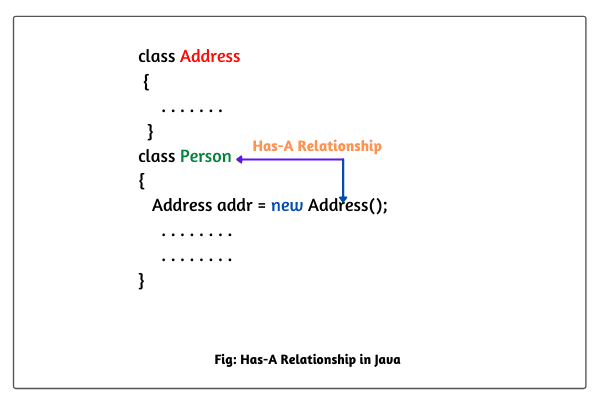 2. We know that a CPU is part of the computer. We can also rephrase this relationship as “A computer has a CPU”.

Does the existence of CPU outside a computer make any sense?

The answer is no. The existence of a CPU makes sense only within the computer. So, a computer and CPU represent the whole-part relationship.

Look at the below code to understand better.

3. We know that a brain has a thought. Thought cannot exist without the existence of the brain. The code is given below:

How to decide which type of Relationship we need?

The best way to decide which kind of relationship we need is as follows:

So, in this case, we will create a superclass named Pet and a derived subclass named Dog.

From all the above examples, you will have understood which kind of relationship you need in your code.

Types of Has-A Relationship in Java

There are two types of Has-A relationship that are as follows:

a. Aggregation
b. Composition

Aggregation: Aggregation is one of the core concepts of object-oriented programming. It focuses on establishing a Has-A relationship between two classes.

In other words, two aggregated objects have their own life cycle but one of the objects has an owner of Has-A relationship and child object cannot belong to another parent object.

For example, a library has students. If the library is destroyed, students will exist without library.

Composition: Composition is another one of the core concepts of object-oriented programming. It focuses on establishing a strong Has-A relationship between the two classes.

For example, a house can have multiple rooms. A room cannot exist independently and any room cannot belong to two different houses. If the house is destroyed, all its rooms will be automatically destroyed.

Hope that this tutorial has covered all the important points related to Has-A relationship in Java with realtime examples. I hope that you will have understood this simple topic.
Thanks for reading!!!
Next ⇒ Association in Java