In this tutorial, we are going to discuss packages in Java with example programs.

In small projects, all the java files have unique names. So, it is not difficult to put them in a single folder.

But, in the case of huge projects where the number of java files is large, it is very difficult to put files in a single folder because the manner of storing files would be disorganized.

Moreover, if different java files in various modules of the project have the same name, it is not possible to store two java files with the same name in the same folder because it may occur naming conflict.

This problem of naming conflict can be overcome by using the concept of packages.

When you create an application in Java, you should create a  proper folder structure for better reusability, maintenance, and avoiding naming conflict but How?

A package is nothing but a physical folder structure (directories) that contains a group of related classes, interfaces, and sub-packages according to their functionality.

It provides a convenient way to organize your work. The Java language has various in-built packages.

For example, java.lang, java.util, java.io, and java.net. All these packages are defined as a very clear and systematic packaging mechanism for categorizing and managing.

Let’s understand it with realtime examples.

Real-time Example of Packages in Java

A real-life example is when you download a movie, song, or game, you make a different folder for each category like movie, song, etc. In the same way, a group of packages in java is just like a library.

The classes and interfaces of a package are like books in the library that can reuse several times when we need them. This reusability nature of packages makes programming easy.

Therefore, when you create any software or application in Java programming language, they contain hundreds or thousands of individual classes and interfaces.

So, they must be organized into a meaningful package name to make proper sense, and reusing these packages in other programs could be easier.

Advantage of using packages in Java

1. Maintenance: Java packages are used for proper maintenance. If any developer newly joined a company, he can easily reach to files needed.


2. Reusability: We can place the common code in a common folder so that everybody can check that folder and use it whenever needed.

Each class will be stored in its own packages such as stdPack1 and stdPack2 without having any conflict of names.

4. Organized: It also helps in organizing the files within our project.

5. Access Protection: A package provides access protection. It can be used to provide visibility control. The members of the class can be defined in such a manner that they will be visible only to elements of that package.

Types of Packages in Java

There are two different types of packages in Java. They are:

The package which is defined by the user is called a User-defined package. It contains user-defined classes and interfaces.

Java supports a keyword called “package” which is used to create user-defined packages in java programming. It has the following general form:

Here, packageName is the name of package. The package statement must be the first line in a java source code file followed by one or more classes.

While developing your project, you must follow some naming conventions regarding packages declaration. Let’s take an example to understand the convention.

See below a complete package structure of the project. 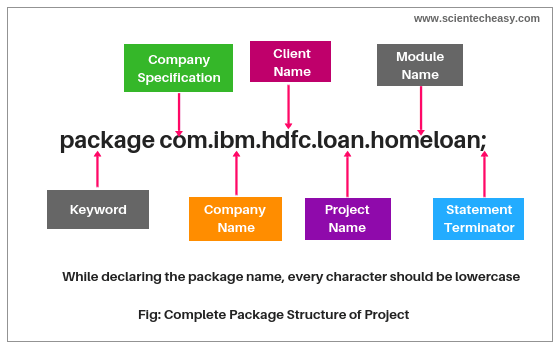 1. Suppose you are working in IBM and the domain name of IBM is www.ibm.com. You can declare the package by reversing the domain like this:

2. hdfc ➝ Client name for which we are developing our product or working for the project.

3. loan ➝ Name of the project.

4. homeloan ➝ It is the name of the modules of the loan project. There are a number of modules in the loan project like a Home loan, Car loan, or Personal loan. Suppose you are working for Home loan module.


This is a complete packages structure like a professional which is adopted in the company.
Another example is:

Note: Keep in mind Root folder should be always the same for all the classes.

How to create Package in Eclipse IDE?

In Eclipse IDE, there are the following steps to create a package in java. They are as follows:

1. Right-click on the src folder as shown in the below screenshot.

2. Go to New option and then click on package.

3. A window dialog box will appear where you have to enter the package name according to the naming convention and click on Finish button.

Once the package is created, a package folder will be created in your file system where you can create classes and interfaces.

These packages consist of a large number of predefined classes, interfaces, and methods that are used by the programmer to perform any task in his programs.

Java APIs contains the following predefined packages, as shown in the below figure:

1. Java.lang: lang stands for language. The Java language package consists of java classes and interfaces that form the core of the Java language and the JVM. It is a fundamental package that is useful for writing and executing all Java programs.

2. Java.io: io stands for input and output. It provides a set of I/O streams that are used to read and write data to files. A stream represents a flow of data from one place to another place.

4. Java.net: net stands for network. It contains networking classes and interfaces for networking operations. The programming related to client-server can be done by using this package.

2. Java.awt.image: It contains classes and interfaces for creating images and colors.

3. Java.applet: It is used for creating applets. Applets are programs that are executed from the server into the client machine on a network.

5. Java.sql: SQL stands for the structured query language. This package is used in a Java program to connect databases like Oracle or Sybase and retrieve the data from them.

How to see list of Predefined packages in Java?

1. Go to programs files and open them.

2. Now go to Java folder and open it. You will see two folders such as JDK and JRE.

4. Now you open lang package and scroll down. You can see classes like String, StringBuffer, StringBuilder, Thread, etc.

Let us make an example program where we will create a user-defined package in a systematic manner.

How to compile package in Java?

If you are not using any Eclipse IDE, you follow the syntax given below:
Syntax:
To Compile the application:  javac -d directory javafilename

After the compilation, you can see the folder structure in your system like this:

How to run Java package program?

Now run the above Java code.
To Run:   java com.scientecheasy.java.corejava.Example

There are three approaches to import one package into another package in Java.

If you import packageName.className, you can only access the declared class of this package. Let’s understand it by an example program.

Suppose scientecheasy have information about the Dhanbad city and TCS need this information. So, we will declare two modules Dhanbad and TCS. TCS is using Dhanbad class but both have different package names.

So, whenever you are using a class of another package, you must import the package first of all.

If you use the fully qualified name, there is no need of using an import statement but in this case, only the declared class of this package can be accessible. It is generally used when two packages have the same class name.

Let’s take a scenario to understand the above concept.

Consider the below image.

A. Let’s create a program using the first approach to call the following requirement.

Will the above code compile?
1. No: because the statement A a = new A(); does not say anything about class A from which sub-packages (scien or tech) it is referring.

2. No: because the statement A a1 = new A(); is also not saying anything about class A of which sub-packages (scien or tech) it is referring.

3. No: because a.m1() and a1.m2() will get confused to call the method of which package’s class. Here, the compiler will be also confused.

In this case, the import is not working. So, we remove the import statement and use the fully qualified name.

Suppose you are not using public with m2() method in the above program then it will give error ” The method m2() from the type A is not visible” because it is a default and default access modifier cannot be accessed from outside the package.

1. While importing another package, package declaration must be the first statement and followed by package import.

3. import can be written multiple times after the package statement and before the class statement.

4. You must declare the package with root folder name (No subfolder name) and the last file name must be class name with a semicolon.

5. When you import, it does mean that memory is allocated. It just gives the path to reach the file.

Hope that this tutorial has covered almost all the important topics related to Packages in Java with example programs. I hope that you will have understood this tutorial and enjoyed it.
Thanks for reading!!!
Next ⇒ Java Methods⇐ PrevNext ⇒