Types of Inheritance in Java | We know that the term inheritance refers to that one class can inherit all of the properties and behaviors from another class.

Inheritance is used for code reusability. That means code once is written, can be used again and again in the new classes.

So far, we have familiarized with basic of java inheritance and advantages of using inheritance in software development. If you have any difficulties in inheritance, go for the previous tutorials.

We have nicely explained the basics of inheritance in java with realtime examples and the best collection of inheritance interview programs with explanations. I recommend that once you definitely see them for practice.

In this tutorial, we will learn types of inheritance in java such as single, multilevel, multiple, hierarchical, and hybrid inheritance with practical example programs.

Types of Inheritance in Java

On the basis of class, there are three types of inheritance in Java. They are as follows:

The classification of inheritance in Java is shown in the below figure. 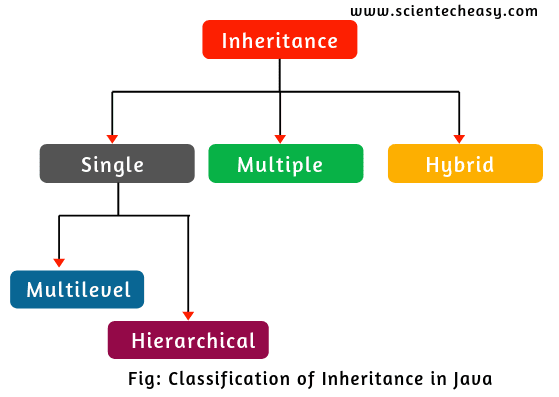 When a class is extended by only one class, it is called single-level inheritance in java or simply single inheritance.

In other words, creating a subclass from a single superclass is called single inheritance. In single-level inheritance, there is only one base class and can be one derived class.

The derived class inherits all the properties and behaviors only from a single class. It is represented as shown in the below figure:

Let’s take a simple example program based on single inheritance in Java.


In this example program, we will create only one superclass and one subclass that will inherit instance method methodA() from the superclass. Look at the source code to understand better.

In this example program, we have a class A in which a single function methodA(). The line “class B extends A” tells java compiler that B is a new class inheriting from class A. This makes class A as the base class of class B and class B is known as a derived class.

In class B, we have defined one function i.e. one method methodB(). Class B contains inherited members ( methodA() ) of class A and methodB().

In the main, we have created an object of class B and called functions methodA() which is inherited from class A and methodB().

Single inheritance is further classified into types that are as follows:

Multilevel Inheritance in Java with Example

Let’s take a simple example program based on multilevel inheritance in java.

Multiple Inheritance in Java with Example

Look at the below figure where class C is derived from two superclasses A and B.

Now, look at the different examples of multiple inheritance in the below figure to understand better.

Practically, it is very rare and difficult to use in a software project because it creates ambiguity, complexity, and confusion when a class inherits methods from two superclasses with the same method signature. The ambiguity created by the multiple inheritance is called diamond problem in java.

But, the functionality of multiple inheritance in Java can be achieved by using interfaces. When two or more interfaces are implemented by a single class, only one method can share the method signature.

Now, you need to understand why java does not support multiple inheritance through class. May get asked in the interview, especially for freshers.

Why Java does not support Multiple inheritance through classes?

In Java, multiple inheritance leads to confusion for the programmer. This is because a class extends many superclasses. But in Java, one class cannot extend more than one class simultaneously. At most, one class can extend only one class.

Therefore, To reduce the ambiguity, complexity, and confusion, Java does not support multiple inheritance through classes.

Let’s understand with a simple scenario of why java does not support multiple inheritance through classes.

Consider a scenario as shown in the below diagram. In this scenario, there are three classes A, B, and C. Class C extends two parent classes such as class A and class B.

Suppose class A and class B have the same method msg() (say) having different implementations.

As per inheritance concepts, both methods will be inherited to class C. If we create an object of class C and calls the method msg() from the child class object, which msg() method will get called? (i.e. which copy of msg() method will available in C?)

So, there will create ambiguity and confusion to call the method msg from A or B class.

Let’s understand how Java does not support multiple inheritance programmatically.

How does Multiple inheritance implement in Java?

Thus, we can implement multiple inheritace in Java by using interfaces. If you have any problem to understand the above program, don’t worry. When you will learn interface in Java, you can easily understand this program.

Why achieving Multiple inheritance by using Interfaces is not so useful in Java?

Suppose if we can achieve multiple inheritance through classes, complete methods are available that can be called and directly used in the subclasses.

Hence, In Java, implementing multiple inheritance by using interfaces is not so useful.

Hierarchical Inheritance in Java with Example

In this kind of inheritance, one class can be a parent of many other classes. Look at the below diagram to understand hierarchical inheritance.

Let’s take an example program where we will create multiple subclasses such as B, C, and D from a single superclass A. All subclasses will inherit msgA() method from class A. Look at the program source code to understand better.

As you can observe in the above example, a single superclass is extended by more than one subclass and inherit the behavior of superclass.